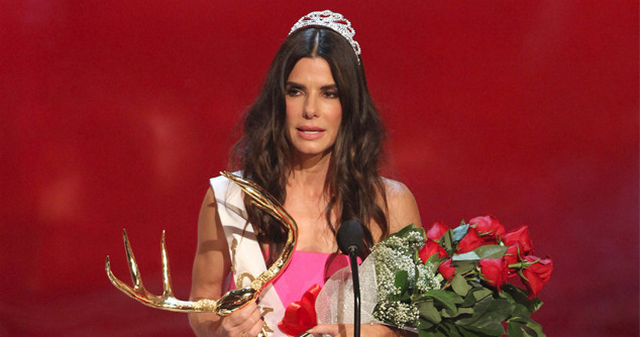 Sandra Bullock Dodges Bullet After Man Breaks Into Home While She Was Inside!

Do Bullock and bullet rhyme? I don’t think they do. My attempt at coming up with a clever title has failed. Anyway, Sandra Bullock had a pretty big scare early Sunday morning.

The 49-year-old actress was home (probably sleeping) at around 6:30 in the morning when a 39-year-old man named Joshua Corbett gained entry into her home. According to investigators, Sandra was not harmed during the alleged robbery. Currently, the incident is being classified as a “hot prowl burglary.”

However, police are trying to determine if this Joshua character is actually a stalker. It would certainly make sense given how successful and beautiful Sandra is. After all, she did just receive the Decade of Hotness Award at the Guys’ Choice Awards Saturday night.

Bullock joked about the award…

“I feel like I’m at my funeral. Decade of Hotness…My question was what decade? I have several under my belt. It should really be Decade of Hot Mess. That I can own and I do that well and I’m still convinced I’m up here because someone dropped out and they needed someone quickly and we know I’m home on Saturdays.”

Not only is she hot and talented, but she’s also really funny. It’s probably a good thing Joshua didn’t reach Sandra in the burglary. She probably would have kicked his a**.

We all watched The Blind Side…