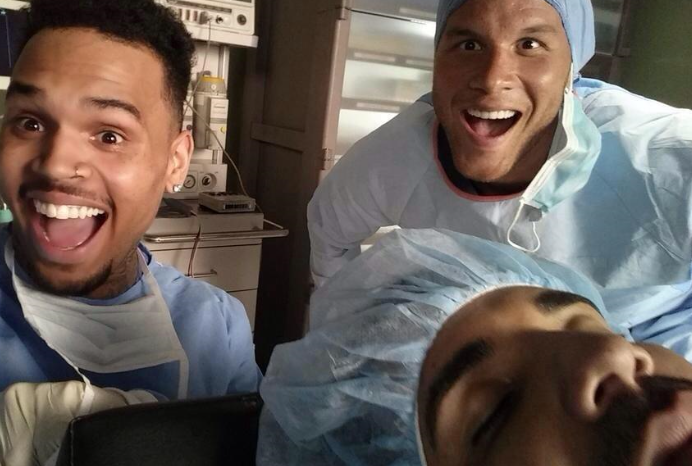 Chris Brown and Drake Team Up for Hilarious ESPY Skit. Looks like Wendy Williams Was Right?

The big news last night was the ESPY awards.  For you non-sports fans, that’s ESPN’s version of a BET award, it stands for Excellence in Sports Performance Yearly Award.  It’s basically another reason during baseball all-star week, the NBA off season and the NFL off season for athletes to dress up, party together and be all around swag-o-rific.

Like any award show there are speeches, hosts and skits, and Drake and Chris Brown teamed up with L.A. Clipper Blake Griffin for a super funny one called “Drake Vs Blake”.

Honestly, the s*%t is actually funny.  In the skit the two basically decide to make a movie together and then argue about who’s name should come first in the movie title,  “Blake or Drake”.  The two then proceed to battle it out with a series of pranks that result in some pretty funny stuff including personal attacks.  This shows that neither of them take themselves that seriously. [more…]

SO WHAT WAS WENDY WILLIAMS RIGHT ABOUT?

Well Wendy fired shots out last week after the photo was released of Chris Brown and Drake in the studio together.  It was clear that the two were working on something together and that the beef over Rihanna was indeed over.  Wendy took it to her now infamous hot topics platform where she fired some shots at RiRi,

“I don’t think anyone but Chris has been serious about Rihanna ’cause Rihanna…don’t take this the wrong way because this is an observational observation. Rihanna is like you hit the skins and scram.

“Well I didn’t make that up! She puts it out there. Like Rihanna is not girlfriend material. Am I wrong? Rihanna is the kind of girl she’s hot, she’s sexy. You do her, then you take your penicillin.

Here is the clip from the Wendy Show.  Wendy definitely keeps it R-E-A-L  HOW YOU DOIN?  The Rihanna marks start at 13:16.