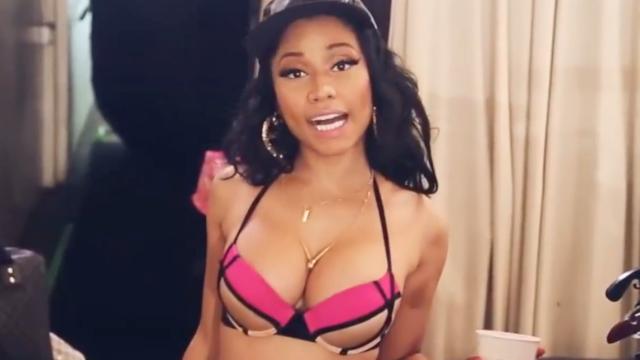 Nicki Minaj said she wanted to push the envelope with her new video, and we have to say, she definitely succeeded.  The 31-year-old entertainer released her new music video for “Anaconda” last night. It’s fitting that it was released at midnight, because that’s really the only time it’s safe to watch this video.

So, why did she decide to twerk down Raunchy Road? She recently talked about the sexy cover art for the hit single, and explained that she’s just following the same path as one of her idols, Madonna.

“[My manager] was thinking that it may be too over the top, and I said, ‘Well you know, in the beginning of my career, I did pictures like that, I did photo shoots like that.’ And I didn’t want to lose that sense of who I am. I feel like one of the people I look up to the most was Madonna, and she’s never stopped pushing the envelope. She’s never stopped taking risks, and I don’t ever want to stop doing that either.”

Okay, okay. Enough with all the text. You just want to see that juicy butt, right? The wait is over. You can watch the ridiculous music video down below. Make sure you watch the whole thing. At the end, she gives a handicapped person a lap dance!