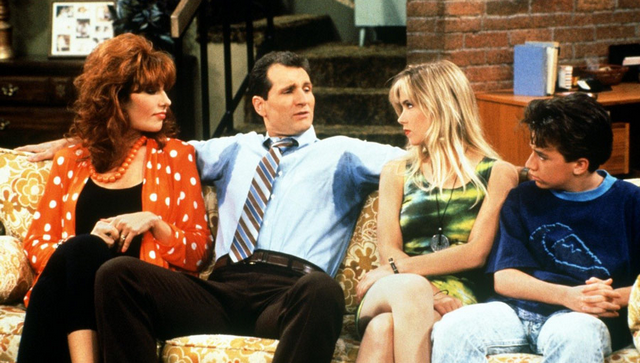 ‘Married With Children’ Cast Reunion! See What They All Look Like 17 Years Later!

Even though Ed O’Neill has found success with Modern Family, he will forever be remembered as the great women’s shoe salesman, Al Bundy, on the classic show Married with Children.

The strange comedy had a wonderful 11-season run on Fox, before calling it quits in 1997. The show starred Ed O’Neill, Katey Sagal, David Faustino and Christina Applegate. And thanks to Katey Sagal, who received a star on the Hollywood Walk of Fame yesterday, the cast reunited and posed for few photos.

Check out how the Bundys look 17 years later!

As expected, Bud Bundy (David Faustino) still looks exactly the same. Even Sagal and Applegate look the same; however, poor Al Bundy has definitely aged significantly. But I’d like to believe that’s because he had all the stress of trying to take care of his wacky family.

It doesn’t really matter though. His characters are still getting all the beautiful women. I mean, first he was married to Katey Sagal in Married with Children, and now he’s married to Sofia Vergara in Modern Family? Not bad, Ed. Keep on doing yo’ thing.