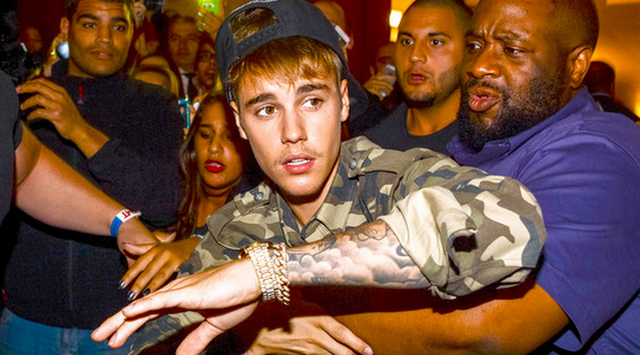 Justin Bieber Starts Throwing Punches In Paris, And We Have All The Pictures!

The Douchebag Virus has officially entered Justin Bieber’s body and it’s attacking his insides, which has forced him to attack everyone on his outsides. Let’s just pretend like that makes sense, okay? Cool.

Let’s get to the incriminating photos and juicy details. The 20-year-old starter of trouble got into a scuffle with several photographers in Paris Tuesday night. The incident happened as Bieber arrived at his hotel just before midnight. As you can see from the photos down below, it certainly looks like Bieber was throwing some punches.

I suppose it’s possible he was going in for a fist bump; however, most people don’t have a fist located on their chin. A witness talked with E! News yesterday and claimed Bieber was upset because he couldn’t get through the crowd.

The witness also confirmed that punches were thrown by the Biebs. He also grabbed a second photographer by the neck. After letting his mustache get the best of him, Bieber’s bodyguards were able to contain the little guy. The witness does add that it was unclear who instigated the fight.

Obviously, from the photos we have, it looks Bieber was the aggressor. I mean, look at this dude in the photo down below. Was he even alive? Or was Bieber attacking a corpse?

It’s a good thing Bieber’s bodyguard was there to pull him away. God only knows how much damage his mustache could have caused. You can’t let something that wild walk around on the streets.