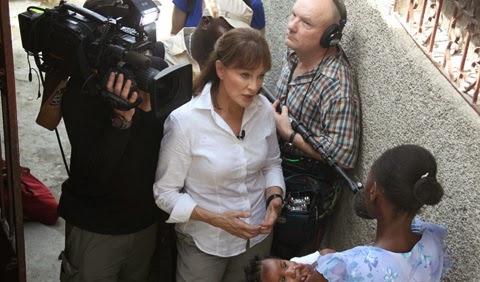 The big buzz word in the medical community is Ebola, with the first confirmed victim in the US, Thomas Eric Duncan, dying of the disease on Wednesday, October 8.  Now, we’re learning that one of the members of the NBC News crew, quarantined because one of their people tested positive, might have broken quarantine… for soup.

It’s alleged that Dr. Nancy Snyderman decided to break her voluntary quarantine to step out to a popular New Jersey restaurant, the Peasant Grill in Hopewell Boro, NJ, on Thursday afternoon.

While the risk for Nancy and her group was low, they’ve now been put on mandatory quarantine status. I guess initially, the CDC thought it was reasonable that a doctor would know the potential dangers of breaking quarantine. Especially seeing Ebola mortality rates are as high as 75% and there is no known cure.

Who knows, maybe it was emergency soup?

The group agreed to a 21 day voluntary quarantine after their cameraman Ashoka Mukpo, was diagnosed with the disease on Oct. 2 . Mukpo was flown to Nebraska for treatment.

While the news is a rumor, the fact that the group’s quarantine has been upgraded to mandatory is very telling. Luckily, no one in the group has shown any symptoms in their time in quarantine. Regardless, a soup run hardly seems like a good reason to put the population at large at risk.