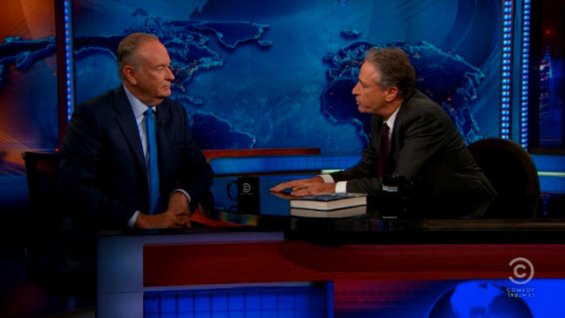 Bill O’Reilly and Jon Stewart have another Classic Battle, this time over “White Privilege”.

On the Daily Show this week, we were treated to another Jon Vs Bill battle.  At times the argument got so heated the two were shouting at each other.  It was entirely unexpected because Bill was really there to pitch his new book, “Killing Patton”.  I think Bill was already put off by the fact that Jon didn’t read his book, but then about 1:30 seconds in to the interview, Stewart really puts him off by jumping right into the “White Privilege” debate.   Stewart leans across the table and says,

“Listen to me.  Here’s all I want from you today — this is it, this is all we got to do in this conversation. I have one simple goal. I want you to admit that there is such a thing as white privilege. That’s all I want.”

O’Reilly was having no parts of that, the gloves were off and the debate began.

We are not going to pick sides here, we cover nip-slips not politics.  However our readers occasionally enjoy some intelligent clips.  (Jon Stewart’s ISIS clips is one of our most viewed Posts).  Regardless of what side you are on, it’s entertaining to watch these two go head to head.

Here is the unedited, extended clip. Note – Jon Stewart is not saying it’s an excuse he’s just saying that it exists.  But you don’t hear me tho’