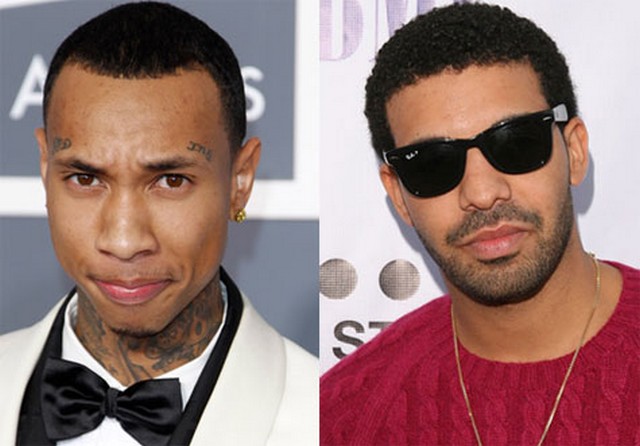 24-year-old rapper Tyga sat down for a long interview with Vibe magazine recently. During the interview, he revealed that he’s currently trying to distance himself from Lil Wayne’s label because he doesn’t like a few of their members.

One of those members being the sensitive rapper we all know as Drake. Tyga claims he actually likes Drake’s music, but he admitted he doesn’t like Drake as a person.

“Yeah, I’m tryna’ go independent. I don’t really get along with Drake. I don’t really get along with Nicki Minaj. I don’t like Drake as a person. He’s just fake to me. I like his music; you know what I’m saying? I think his music is good, but we’re all different people. We were forced together and it was kinda’ like we were forcing relationships together. It is what it is. But I been friends with Chris Brown for like six years. That’s my real genuine friend.”

Ah, yes. Chris Brown seems like a great friend to have. I know that sounds sarcastic, but I am actually being serious. If you manage to build a true relationship with Chris Brown, then you have no reason to be afraid of anything. He’s going to protect you. If someone gives you the wrong order at McDonald’s, Chris Brown will make sure that employee walks out of the place with a large order of fries up their ass.

Anyway, Tyga also talked about those Kylie Jenner dating rumors. Is he really dating the 17-year-old reality star? Right now he claims they are just friends, but we’ll see if his answer changes once she turns 18.

“Kylie? Nah. See the thing about Kylie…I’ve known Kylie and the whole family for four years. I introduced [Blac] Chyna to Kim Kardashian about a year ago. So everybody’s been cool, but like it’s just so hard, their world is different. If somebody wanna hang out, cool, I’m not opposed to hanging out with somebody.”

There you have it, folks. Drake is fake. Nicki Minaj is fake. Chris Brown is great, and Kylie Jenner is fun to hang out with. We’ll see if Drake responds.