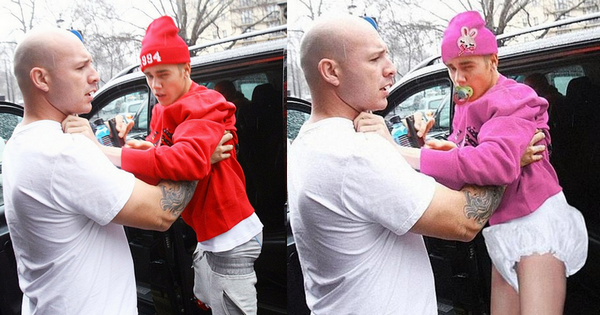 You have probably noticed several “10 Times We (insert something incredibly silly here)” lists lately. Every website is throwing their 10 hats in the ring, but we have noticed that most of the lists are too nice.

10 times we wanted to be Beyonce

Yuck! We understand it’s the middle of winter, but that’s just too much warmth for us. We need some smack talk, and here on TVST, we serve smack talk 24/7. Who could forget this incident? Bieber tried to get in a fight with a paparazzo out in London. Screaming, “I’ll f–king beat the f–k out of you!” at the photographer. That’s when his babysitter had to step in to make sure he didn’t do anything stupid. I’ll let you decide if I am talking about the car or Justin Bieber’s existence.

No. 8 – The Unnecessary Taunts

He knows we hate him. He knows we were at home watching this speech. Thinking about shoving that pointy trophy up his nostril. Don’t you dare try to shake us off, Bieber. After getting booed by the audience at the ‘Fashion Rocks‘ show, Justin Bieber decided to strip down to his Calvin Klein underwear. It was a bold move, and it actually made some of the girls in the audience scream his name. However, the majority of people in the audience still wanted to grab his nipples and twist the sh-t out of them. And not in some weird, sexual way. All pain here. Did Justin Bieber really spit on his fans while standing on the balcony of his hotel? Probably not. That’s what the initial reports wanted you to believe, but multiple sources claim he did not hit anybody with his saliva. In fact, the fans who were waiting outside his hotel room claim he was actually very nice to them and gave them hot chocolate. But still, everyone looks like a douchebag in mid-spit. Would still punch in face. Who could forget this mess? The Biebs had to pay his former neighbor $80,000 in restitution after creating an IHOP combo all over his expensive front door. In addition to the $80,000, Bieber also had to take anger management classes. Classic Biebs. Everyone looks punchable when they flash their middle finger at the camera. If you have a photo of yourself flipping off the camera, make that picture your profile photo. It’s a nice warning to let people know they should avoid talking to you.

Do I even need to explain? Just look at his face. Those GIFs are so infuriating. I have spent the last five minutes punching my computer screen. My knuckles are now covered in dust, and a nice collection of dead gnats I forgot to wipe off several months ago. Who the hell does this dude think he is? Donating $100,000 to Whitney Elementary school? Visiting the Philippines to help the victims of Typhoon Haiyan? Going to the hospital before a concert to spend some time with a 7-year-old cancer patient? Putting together a private concert for an injured fan in Australia? Surprising over 100 kids with Christmas gifts during a Boys and Girls Club screening of his Believe film?

How dare he do nice things for people. Making me feel bad for wanting to punch him in the face. What a f–king douchebag, right?