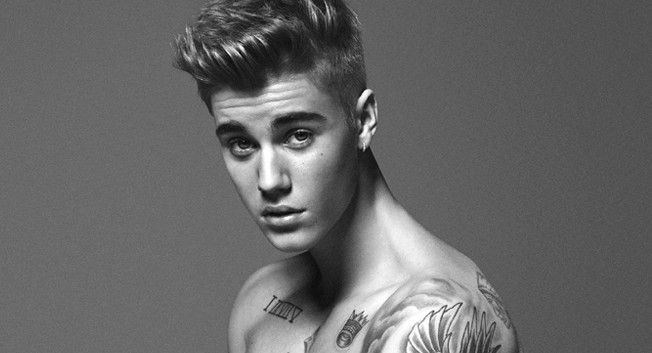 This Calvin Klein ad is causing too much drama. We already reported on the death threats supermodel Lara Stone was receiving from jealous Beliebers.

Shortly after that post, the website BreatheHeavy.com claimed to have ‘untouched’ photos of Justin Bieber from the Calvin Klein shoot. And in those photos, Bieber’s muscles and his junk looked less impressive.

For those who haven’t seen the photos, you can check them out down below. As you can clearly see, the photo on the left shows Bieber looking a little scrawnier than the final version on the right. You can also see that his package looks a lot smaller, as well. The photo delighted Bieber haters and frustrated Bieber’s crazy fans.

Justin Bieber’s impressive legal team jumped on the photos fast. They forced the site to take down the photos by sending them a cease and desist letter. The website released the following statement before completely removing the photos from their site:

“Team Bieber sent BreatheHeavy a cease and desist letter because of the alleged un-retouched Calvin Klein photo we posted, asking we remove the picture in question as well as provide a retraction. Because BreatheHeavy is not about making anyone feel bad or intentionally stirring the pot (and are definitely not here for lawsuits), we shall retract the story per request. Bieber denies the photo is real, and I respect that and will believe him.”

And the folks over at BreatheHeavy didn’t stop there. They were obviously terrified by the power of the Biebs, so they included the strange quote you see down below from Bieber’s personal trainer.

I can definitely confirm that he is a well-endowed guy. I sound weird saying that, but yes.

Okay then. We are supposed to believe his personal trailer? As if he would put his job in jeopardy by telling the world that Bieber’s junk isn’t all that impressive. At the end of the day, we all know the truth. The photos were obviously retouched. It’s just how the business works. It has nothing to do with Justin Bieber.

But I will say that I don’t think the ‘before’ photo you see above is legit. Bieber may not be as muscular as he looks in the official photo; however, I don’t believe he’s really that skinny either.

As always, the truth is somewhere in the middle…