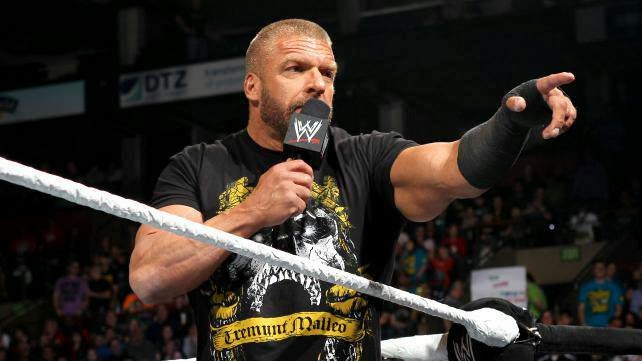 There is a time in every young boy’s life when an obsession with professional wrestling takes over. The WWE is basically just a soap opera on steroids. Most adults understand everything that happens in the ring is just for your entertainment. It’s all planned. The “bad guys” you see in the ring are really probably the nicest wrestlers in the building.

Triple H proved this at the Monday Night Raw show in Dallas, TX. The wrestling legend was sitting ringside to watch John Cena’s big match against Kane, The Big Show and Seth Rollins. During the match, Triple H got in a heated discussion with a young boy, who was apparently John Cena’s number one fan.

At some point during the conversation, the young boy started to cry, which caused Triple H to break his evil character. A fan sitting behind the kid snapped the heartwarming photo you see down below… But Triple H didn’t stop with just a hug. As some of you may know, the superstar is also the real-life Executive Vice President of the WWE. This means he was able to hook the kid up with free merchandise. But wait, there’s more! According to the fan who took the photos you see above, the young boy was also invited backstage after the show to meet his favorite WWE superstars. And after this special night, we have to imagine Triple H is now at the top of his list.