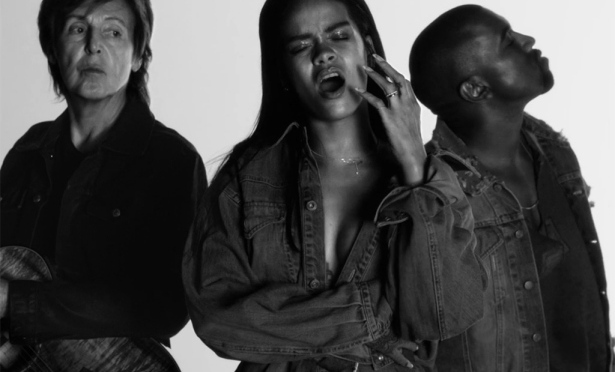 Kanye Set To Perform Twice During The Grammys, Listen To The Song He’ll Be Performing With Rihanna!

Sunday night is going to be a huge night for Kanye West. According to a CBS press release, Kanye will take the stage to perform a “never-before-seen solo performance” during the big show. Hopefully this means he will be debuting a new song this Sunday.

In addition to the solo performance, CBS also revealed that West will team up with Rihanna and Paul McCartney. They will be performing Rihanna’s new song, FourFiveSeconds. It should be one of the best moments of the night. The song has been climbing the charts ever since it was released last month.

And just yesterday, Rihanna released the music video for the song. It already has over 3 million views on YouTube! You can add to that impressive total by clicking the play button down below. We suggest that you do it. The lyrics are incredibly simple, the melody is simple, the music video is simple.

Everything about this song is simple, but that’s what makes it so beautiful and catchy. Even people who enjoy hating on Rihanna’s voice have to admit there is just something special about this song.

Check it out below. What do you think? Excited to watch the performance on Sunday?