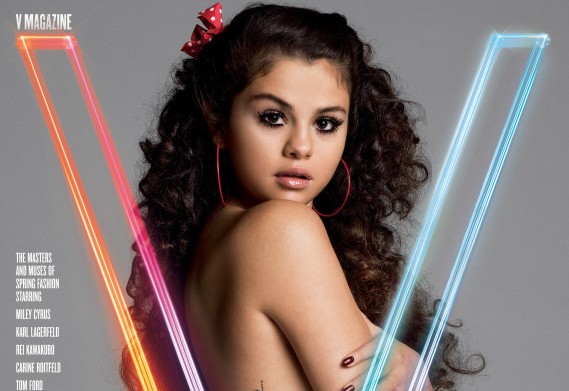 The busy 22-year-old singer/actress is currently filming a movie with Paul Rudd and Craig Roberts. She will be starring as ‘Dot’ in the film adaptation of Jonathan Evison’s novel, The Revised Fundamentals of Caregiving. But before she kicked off filming, Selena had a little fun with V Magazine.

In the magazine’s 94th issue, Gomez posed topless, wearing nothing but a pair of high-waisted shorts, a polka-dot bow and two red hoop earrings. Her hair is also a bit different in these photos. In one photo she can be seen covering up her curled hair with a strange, cow-print cowboy hat.

Check them out down below… Definitely digging that cover shot, but I am not feeling the cowboy hat/bandana look. It’s giving me the heebie-jeebies. I just picture her pulling out a knife and stabbing everyone around her with that same, “Oh…did I do that?” look on her face.

Anyway, she was also interviewed by James Franco for the magazine. She opened up about her past relationships.

“I think the next time will be much different…which will definitely not be any time soon. That’s a growing up kind of thing. I was 18 years old, and it was my first love. The older I get, I’m guarding certain things more. After being put through the scrutiny, I understand what it is. When you’re young and you’re being told so many different things…it almost felt like all we had was each other, like the world was against us, in a way. It was really weird but it was incredible. I would never take it back in a million years. You live and you learn, you know?”

We know, Selena. We know. It happens to everyone. Just don’t let it happen again.