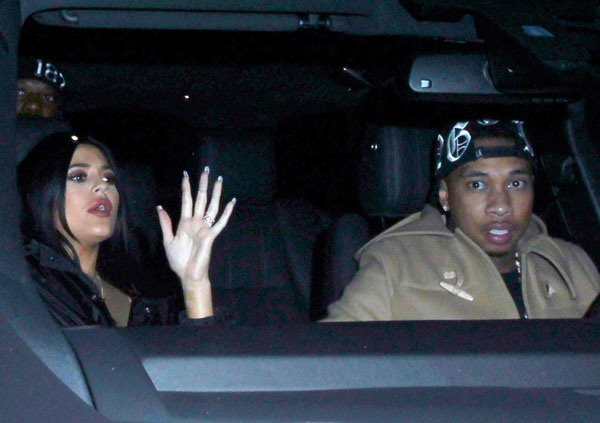 The 25-year-old rapper has certainly been spending a lot of time with the 17-year-old Kylie Jenner. We have seen photos of them going out to eat together, laughing, looking at each other with those “romantic” eyes. It certainly seems like there is something going on between them; however, Tyga continues to deny the rumors.

During a recent interview with Power 105 Breakfast Club, he made sure to deny the dating rumors right away.

I’m not dating Kylie, I just want to get that out of the way. I want to be clear to everybody that I didn’t leave my family to be with Kylie. That’s ridiculous. Me and [Blac] Chyna, we broke up almost close to a year [ago] now, because of the decision we made, and things in our relationship that weren’t going right, [so we] decided to split to raise an emotionally stable kid.

He then went off on the media, claiming we never cared about him until we figured out he lived next door to Kim and Kanye.

But I’ve been friends with them before I even met Chyna. I was friends with Scott [Disick], her family for years, so me hanging out with them was nothing new. People just want to make a story out of it.

Yeah, we admit. It does make a good story, but we’re not exactly just making things up. Tyga and Kylie spend a lot of time together, which is a little suspicious. I mean, let’s say you were an older brother, right? And you had this friend, who was in his mid-20s like you, and let’s pretend this friend started spending weekends with your little 17-year-old sister.

That would make you suspicious, right? Even though Tyga claims Kylie’s, “maturity and mentality is different than a lot of people.” We still wonder how much they actually have in common.