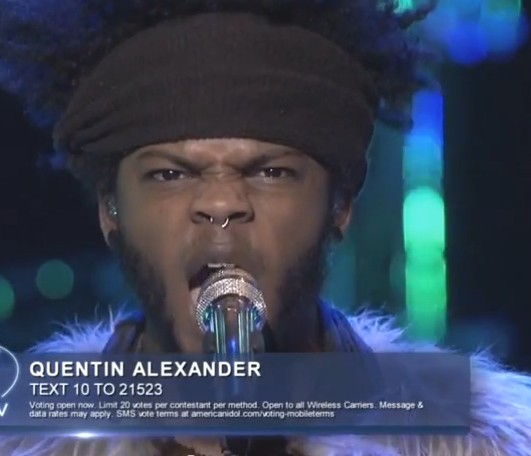 The top 24 was revealed last week, and this week we are being treated to a round of performances from the top 12 boys and the top 12 girls. The performances were filmed in Detroit a week ago.

Typically, this is when we would be introduced to live shows, but now that Idol’s time has been cut down to an hour, they had to make a few changes. There was just no way they were going to be able to fit in 12 performances in an hour-long live show.

Heck, they had trouble fitting in 12 performances during their two hour shows in previous seasons! But don’t worry, live performances will start up again after next week’s elimination. Speaking of the elimination, four of the guys you saw on stage tonight will be going home, so your votes are going to come in huge.

Who should you be voting for? Well, that’s entirely up to you. However, if you are on the fence and need a little help, allow me to give you my three favorite performances from the night.

Quentin Alexander – “I Put A Spell On You”

I’ll admit, Alexander flew under my radar during the first part of Hollywood week, but that all changed by the end of the week. When the judges narrowed things down to 24 last week, I was rooting hard for Quentin. Thankfully, the judges were also huge fans of his, and after his performance tonight, I have a feeling he’s going to have a lot of new fans.

I think Keith Urban said it best when critiquing Quentin’s performance, saying, “What’s great is you haven’t even made a record yet, and it was like a Grammy performance. It really was.”

Clark Beckham – “When A Man Loves A Woman”

Really? You’re going to sing When a Man Loves a Woman on the first night? Really? That’s what I was thinking when Ryan Seacrest introduced him. I was fully prepared to eat a plate full of cheesy, microwaved nachos.

But you know what? He freakin’ nailed it! The passion in his voice and the way he directed the band behind him. Damn. It was a badass performance. I could see him singing that song during the finale.

How old is this dude again? 19-years-old? And he’s already this comfortable on stage? He’s going to be something special, and I can only hope Idol voters realize this. He’s insanely talented and nearly impossible to hate. Yeah, one could argue that he needs to show off his vocal skills a bit more, but tonight wasn’t the night to switch things up.

It was a smart decision to pick that song early on in the competition. Pretty soon, everyone is going to hate the song because it’s being played so much. He grabbed it while it’s hot.