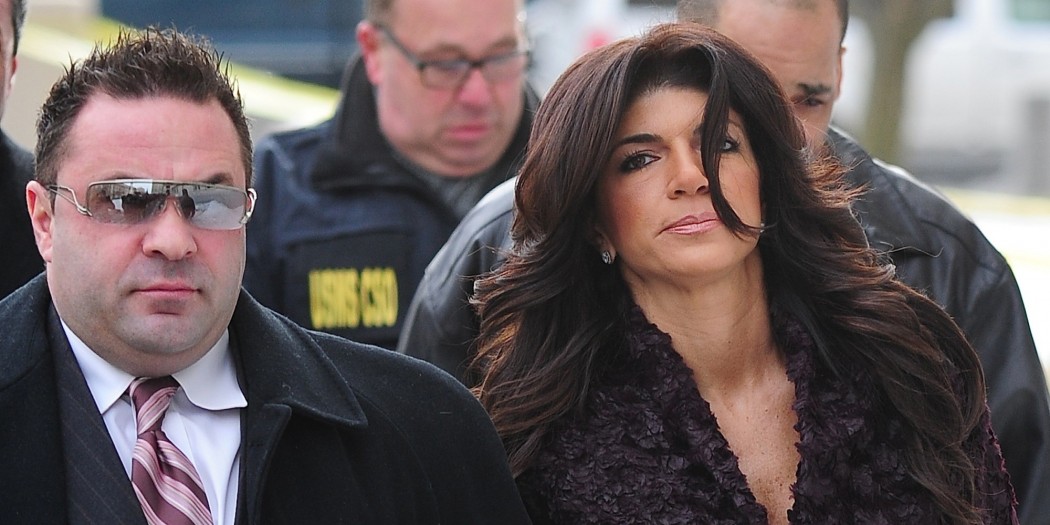 Teresa Giudice Just Earned More Than You From Prison; But Will It Add More Time To Her Stay? While you and I struggle everyday to hit 6 figure pay days Teresa Guidice is doing it behind bars. We know that she is being held at The Danbury Correctional Institute and we also know that the Reality Star has been making about 12 cents per hour doing some type of manual labor.  Gone is the New Jersey mansion she is used to, she most likely spends her time in a footlocker that’s 2×3 with 4 to 6 other bunk mates.

Somehow, even in these conditions she has managed in just a few months to earn a six figure salary.  If that is all she makes during her stay, it will put her earnings per month at $6,666  before taxes.  That’s if she says in for the full 15 months’ of her sentencing.  That’s a decent size pay check. The problem she has is the manner in which she earned the money could earn her more time in jail.

Radar Online reports that during a recent visit, someone from Teresa’s family took three photos of her. She was wearing her light brown prison outfit and she had no make up on. As you can imagine these photos are tantamount to internet Gold.  The source tells Radar that the photos will be released soon,

“The family shopped the images around and one celebrity weekly magazine paid close to $100,000 for them. They’ll be released very soon.”

The same source says that the Danbury Federal Correctional Institute will be pissed because having a cell phone during visits is a flagrant breach in security. They explain,

“You cannot take cell phones into the prison, but somehow, this particular family member was able to — and snapped away without guards noticing!”

Cells in cells are a real problem for correctional institutes everywhere.  Wardens take it very seriously because a smiling selfie from prison is a big middle finger to the whole system including the victims of the original crime and their family.  Some criminals even go as far as to operate Facebook pages, even posting videos. If you don’t believe me….watch this crazy video.

Although the video shows the inmates in summer camp mode, it’s all relative.  These are violent criminals and in many ways, their lives in prison are more organized and safer than it was out of prison.  This actually gives them more freedom in jail than out.  This is not the case for Teresa.  Larry Lavine is the director and founder of Wall Street Prison Consultants says that prison won’t exactly be a cakewalk for the Real Housewife of New Jersey star,

These institutions are all overcrowded. When she wakes up at six o’clock in the morning, she’s going to have to run to the bathroom to wait in line for the toilet, sink, and showers. She’s only going to have maybe a half hour to 45 minutes to take care of her hygiene, make her bunk up, and get ready for work.

Between 6 AM and 7:15 AM, she’s got a lot of shit she’s got to do, and it’s not like she can leisurely run into the bathroom when she wants. She’s got to compete for time on the facilities there.

He also thinks that she will do just 10 months of her 15 months sentence if she doesn’t f*ck up.  Hopefully she hasn’t.  It will be interesting when the pictures do post if her time behind bars increases. Maybe someone in her camp will read RadarOnline and realize that $100,000 isn’t worth a few months of freedom.  Or maybe it is.