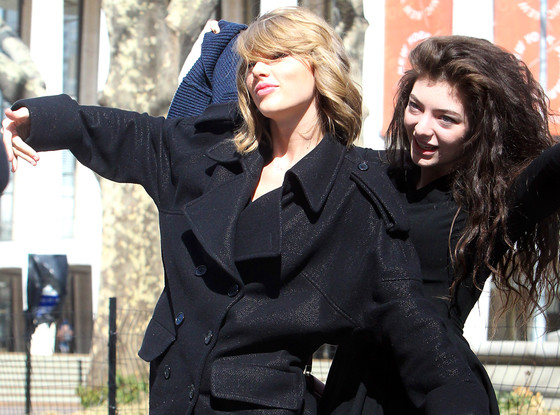 Lorde And Taylor Swift’s Friendship In Trouble? Find Out What T-Swift Had To Say!

Oh em’ gee! Have you heard the rumors going around? Best friends Taylor Swift and Lorde are reportedly fighting with each other. Seems ridiculous, right? Well, let’s see if we can figure out what is going on.

There had been reports claiming Swift and Lorde were arguing with each other because they couldn’t agree about recording a duet together.

We are not sure what the details are behind that, but apparently one of them was wanting it to happen more than the other, which was causing some tension between the two BFFs.

But is there any truth to this rumor? Probably not. There is a chance the two stars aren’t exactly agreeing when it comes to this rumored duet together; however, they are certainly not fighting about it. In fact, they are laughing at us for even reporting it.

Media, when you say ‘Lorde & Taylor are fighting’—by fighting do you mean ‘FaceTiming constantly from US to NZ and LOLing at you? Thnx bye.

Damn. Does anyone else get the feeling that the media can’t hurt Taylor anymore? She’s had to deal with them for so long that I actually believe she just laughs them off now. T-Swift has changed a lot in the past few years, and we believe she changed for the better.

Anyway, what about this duet? Lorde talked about it while chatting with Capital FM radio…

Yeah we are [different] but I think the cool thing about Taylor is she is pretty willing to go a lot of places with music. I think that last record [Red] in particular, everyone was like ‘Woah.’ And I think with an artist like her, the sky is the limit.

Sounds like they will figure something out. They are smart. We trust them.