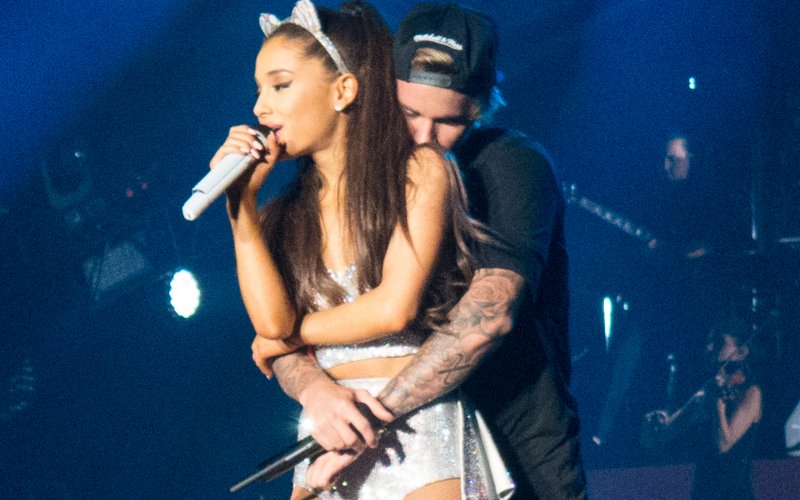 Justin Bieber Too Handsy With Ariana Grande On Stage, Is Big Sean Ready To Fight? (PHOTOS)

A little over a week ago we showed you a video of Justin Bieber surprising Ariana Grande fans down in Florida. He made a surprise performance during her concert, and everyone seemed to enjoy it.

In fact, Grande enjoyed it so much she asked Bieber to make another surprise performance. This time he joined her on stage in California at The Forum. He came out to help her sing Love Me Harder, and during the song it looked like Bieber was about to make love to her on stage. You can see from the photos that he had his hands all over the 21-year-old singer/actress.

Why is this a problem? Well, because Ariana Grande has been dating rapper Big Sean. And yesterday, this tweet was spreading around the internet like peanut butter on a slice of white bread.

Oh, sh-t! IT’S ABOUT TO GO DOWN! Forget about Mayweather vs Pacquiao! Give us Bieber vs Sean right meow!

But wait…wait…f–king wait. Don’t buy your tickets just yet. According to a rep for Big Sean, that tweet you see above is 100% fake. He and Justin are good friends. We know how much you all hate happy endings, but it looks like this story is going to end with one.

I still think Big Sean needs to watch out. Bieber and Grande did look pretty comfortable on stage together. What’s going to happen when he visits her hotel room after the concert? When she complains that her feet hurt? You think he’s just going to say, “Too bad.”

Hell no. He’s going to rub the pain away, and we all know what happens after that. It doesn’t stop with the feet.