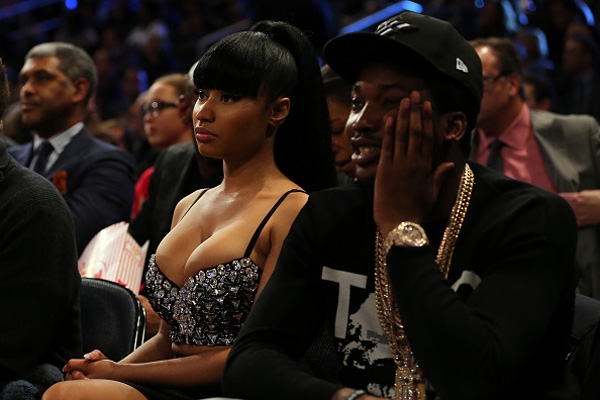 Did Nicki Minaj Really Just Get Engaged To Meek Mill? See The Huge Ring Inside! Well, that was quick! It seems like just yesterday Nicki Minaj was crying on some radio show after breaking up with boyfriend of over 10 years late last year. But now just a few months later, the 32-year-old rapper has allegedly said “yes” to Meek Mill.

We are not 100% sure when their relationship started, but most sources say it was in January or February, which means they have only been dating for two or three months.

The engagement rumors started floating around when Nicki posted a photo to her Instagram account. In the photo, she is standing next to her man with a big ass rock on her finger. That was on Tuesday. And then she posted a Twitter message the next day saying, “I’ll post it later” with a diamond ring emoji inside the tweet.

And she certainly delivered just a few hours later. She posted the incredible photo you see below. Sadly, the only caption she included was a line of excited emojis. Daaamn, right? That thing is bigger than my eyeball. According to a jewelry expert who talked to E! News, this ring would retail for approximately $500,000.

This looks like a 15-carat fancy yellow heart modified brilliant cut diamond mounted in platinum with a double halo of white pavé diamonds. This would retail for approximately $500,000.

Not bad, Mr. Mill. Not bad at all. And even though the news has not “officially” been confirmed. Like we said, Nicki didn’t include a caption saying, “I AM ENGAGED!!!”

However, several sources are confirming the news. One source told E! News the following…

Both Meek and Nicki have been spending amazing quality time together lately and have gotten extremely close these past few months. It may seem like it all is happening very quickly but Nicki and Meek are in this 100. They truly love each other.

Good for them. I mean, would I ever marry someone after only a few months of dating? Heck no! But we’re all different people. Maybe they are truly perfect for each other.

We wish them nothing but the best!