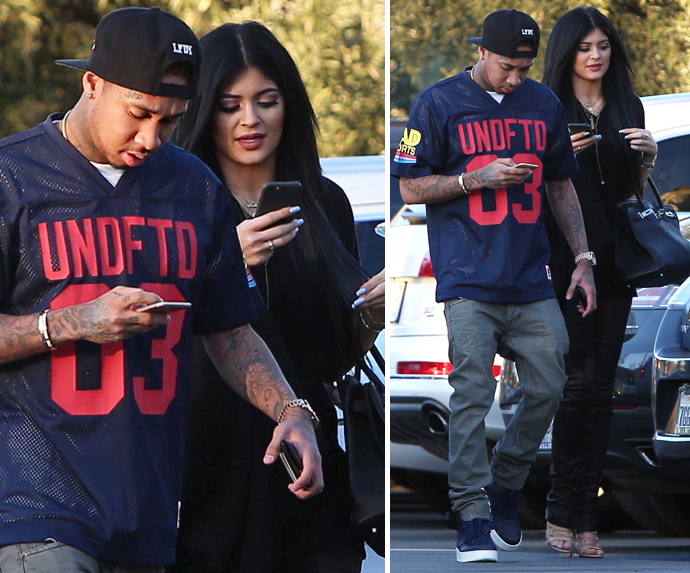 Does Kris Jenner No Longer Approve Of Kylie Jenner’s Relationship With Tyga? Even though they aren’t “officially” together (whatever the hell that means), Kris Jenner is starting to worry about Kylie’s strange relationship with Tyga. At first, it seemed like most of the Kardashian family was supportive of the two hanging out together, but now it looks like things have changed.

One of Kylie Jenner’s best friends told People.com that her family now believes 25-year-old Tyga and his entourage are a bad influence on the 17-year-old reality star.

Her parents know she is going to date who she wants, but they are worried about him having a negative impact on her decision making.

And as we all know, Kylie already seems to be obsessed with getting older. She doesn’t seem to have any interest in being a teenager. Admitting to getting lip injections, and trying to look more like her older sisters every single day.

Her family is worried she is growing up too fast…

She’s become a perfectionist because she feels like she needs to be as sexy as her other sisters, specifically Kendall and Khloe. A lot of Tyga’s friends are enablers. That makes her mom the most nervous. She doesn’t want Kylie getting off track.

Plus, Tyga’a drama with Blac Chyna probably isn’t helping things. There were reports going around claiming Blac was going to use Tyga’s new relationship against him in their custody battle. And just recently, Blac’s mother blasted Tyga in an interview, calling him a f–king pervert.