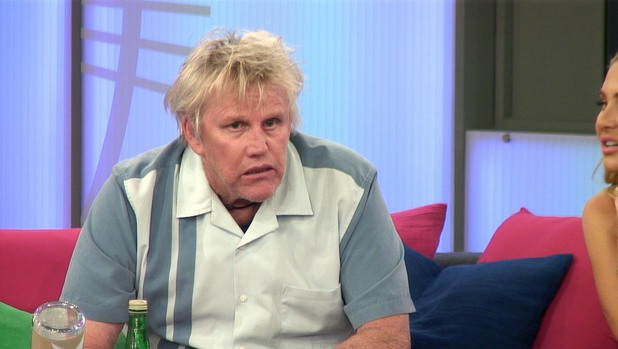 When I tell people that Gary Busey is my hero, I actually mean it. If I ever meet Gary Busey in real life, I’d act more excited than a can of beans on a Saturday night in Jacksonville. That’s pretty freaking excited. I would take off my shoes, leave my socks on, and dance around with a turtle on my head.

Why am I such a huge fan of Busey? Because he doesn’t give a f–k about anything, and the Entourage creator/director Doug Ellin confirmed this during an interview with AOL Build. Back in 2004, the 70-year-old actor starred in a ridiculous episode of Entourage titled, “Busey and the Beach.”

And you would think that the actor would remember starring in the episode, especially considering his freaking name was in the episode’s title! But we all know Gary Busey’s mind is preoccupied with more important things, like trying to figure out how people place those tiny ships inside bottles.

Snooki looks for her nose on a beach after Gary Busey walked up to her and said, “I GOT YOUR NOSE!”

While directing the new Entourage movie, Ellin told Busey on set, “we’re going to do this just like we did last time.” Busey responded with, “What do you mean last time? I did the show?”

Ellin was shocked, “Are you f–king kidding me?” He asked the actor. He wasn’t kidding. He was 100% serious. In fact, he’s probably already forgot his part in the movie. He’s going to see it in theaters and be like, “What the hell? I was in this thing? Did they pay me?”

And since we’re sharing awesome Gary Busey stories. Entourage’s Kevin Connolly has one of my favorites…

He said, ‘Kevin we’re going to play a game called tickle and pee.’ I said ‘Gary, no. I’m 35 years old.’ He chased me down and held me down and tickled me like I was 9 years old. I almost peed.

Geez. I am so jealous right now. More jealous than a prairie dog watching The Bachelorette.