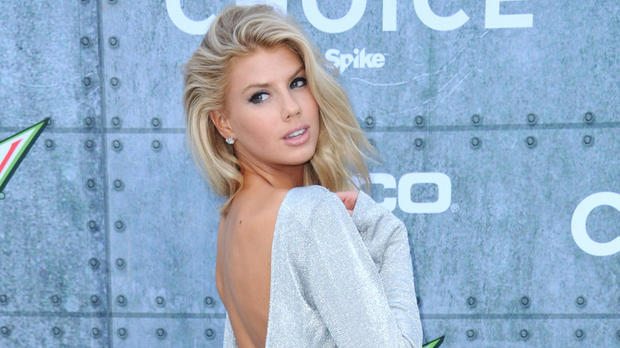 Do you know 21-year-old model/actress Charlotte McKinney? Probably not. She is best known for being the featured model in a Carl’s Jr. commercial, which was released online back in January of this year. If you haven’t seen the glorious commercial, you can check it out by clicking this link. She also appeared on this past season of Dancing With the Stars; however, was eliminated early on in the competition.

Anyway, McKinney hit up Spike TV’s annual Guys’ Choice Awards last weekend, and she brought something special to the red carpet. As you can see in the photos below, the model was wearing a pretty impressive silver dress. And thankfully for us, that dress was “missing” a big piece in the back. Just the right amount of crack showing right there. I approve. But honestly, it’s not even about the little bit of crack showing. Look at her freaking back! I don’t think I have ever been so attracted to a back before.

Especially when you consider what McKinney is offering in the front…

Unfortunately, McKinney is not single at the moment. According to E! News, the 21-year-old is dating 41-year-old actor Stephen Dorff. I say unfortunately, but it’s not like I (or anyone reading this) had a chance. If the only three (four?) things left on Earth were McKinney, me, and a cucumber covered with fire ants, I am pretty sure she would choose the cucumber.

If you want to watch McKinney on the annual award show, you can check it out June 18 on Spike TV.