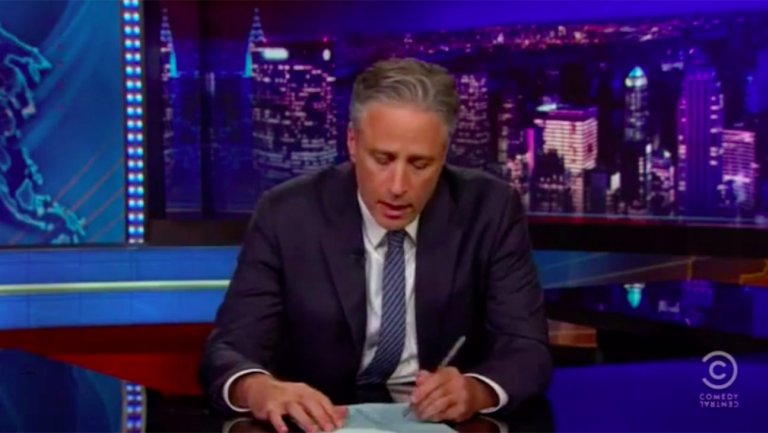 When Jon Stewart gets serious, he’s like my dad. My Dad is one of the funniest men you will ever meet. Under any situation he can make you laugh and he is almost always smiling, at least on the outside. He can turn the craziest situation into a memorable moment filled with belly laughs and people spitting their soda out trying to suppress their laughter, but when he is not laughing and smiling….then you know that he is all business and that something is terribly wrong. This is Jon Stewart.

In the wake of the South Carolina church shooting and the 9 innocent deaths, Stewart was not in a joking mood. A man who gets paid to be well-spoken and to make his points simple so that it’s understood by the lowest common denominator but yet impacting enough to make a difference, opened with some powerful commentary,

I have one job, and it’s a pretty simple job. I come in in the morning and we look at the news and I write jokes about it. But I didn’t do my job today, so I apologize. I got nothing for you in terms of jokes and sounds because of what happened in South Carolina.

And maybe if I wasn’t nearing the end of the run or this wasn’t such a common occurrence, maybe I could have pulled out of a spiral, but I didn’t. And so I honestly have nothing other than just sadness, once again, that we have to peer into the abyss of the depraved violence that we do to each other and the nexus of a just gaping, racial wound that will not heal, yet we pretend doesn’t exist.

He also said that the killings were an act of terrorism, but one that happened on our own turf. The enemy is us.

This is a terrorist attack. This is a violent attack on the Emanuel Church in South Carolina, which is a symbol for the black community. This wasn’t a tornado. This was racist. This was a guy with a Rhodesia badge on his sweater.

Here is the full 5 minute opening…I will post the official clip once the Daily Show posts it.