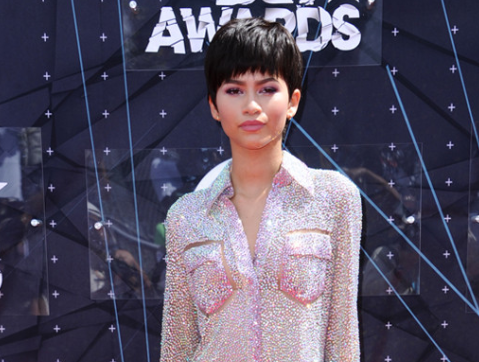 People just love to talk about Zendaya Coleman’s hair. We are sure you all remember the Fashion Police incident involving host Giuliana Rancic. She wasn’t a fan of the 18-year-old’s dreadlocks at the Oscars, saying that it looked like her hair smelled like “patchouli oil and weed.” She was later forced to apologize for her comments after many fans felt like she was making a racist joke.

And now several months later at the BET Awards, people are once again hating on Zendaya’s hair. The actress/singer/dancer showed up to the red carpet with a pretty fresh pixie-cut wig. As you can see from the photos, she appeared to be enjoying the hairstyle, but there were a lot of people who hated it. Those Twitter trolls were out in full force, and they were saying some pretty nasty things about the wig.

But thankfully, Zendaya didn’t let the haters ruin her night. Instead, she decided to send out the tweet you see below… Honestly, it’s a little strange that people were focused so much on her hair. Did no one notice how great her legs looked? F–k the hair. She could adopt Shia LaBeouf’s latest hairstyle and she would still look amazing.

I will admit this Kris Jenner hairstyle isn’t my favorite look, but would I actually go on Twitter to tell Zendaya that? No. Because why should she care what I (or anyone else) thinks of her hair?