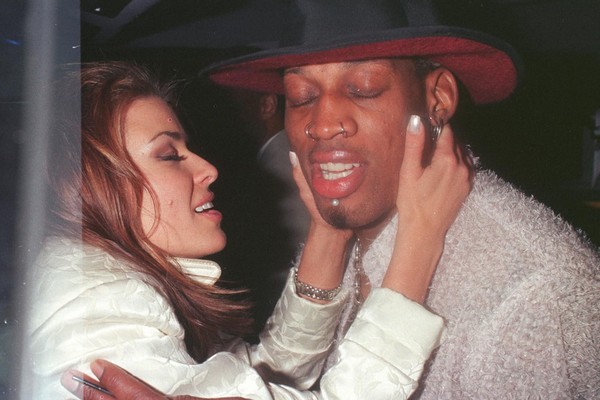 5 Famous Women Who Have Physically Abused Their Men Sadly, if we made a list titled, “Famous Men Who Have Physically Abused Their Women” it wouldn’t be as interesting because it happens more often. A husband abusing his wife is what most people assume when someone mentions domestic violence; however, that isn’t always the case.

It might not get reported as much, but there are men out there who are constantly abused by their partner. Just take a look at the examples in the list below.

And remember, if you (or anyone you know) is being abused, please don’t be afraid to get help. You can click here to visit The National Domestic Violence Hotline. Believe it or not, some people actually cheered when Elin Nordegren attacked serial cheater Tiger Woods back in November of 2009. But just because your husband cheats on you (several times) doesn’t mean you’re allowed to chip his tooth with a cellphone and scratch his face like a mountain lion.

That’s what Elin did after she confirmed the famous golfer had been cheating on her with multiple women. After throwing the phone at him, she reportedly chased him out of the house with a golf club. He jumped inside his 2009 Escalade, but he didn’t make it very far, crashing into a tree and a fire hydrant. Of course, there are different versions of the story; however, this seems to be the most common one. The good news is that their relationship is better now after their divorce in 2010.

“My relationship with Tiger is centered around our children and we are doing really good – we really are – and I am so happy that is the case. He is a great father.” Some people forget that Carmen Electra and Kim Jong Un’s best friend Dennis Rodman were actually married at one point. Their electric marriage only lasted a little over a week. Rodman filed for annulment, claiming he was of “unsound mind” when he agreed to marry the model/actress.

In 1999, Electra and Rodman were both arrested for allegedly battering each other during a domestic dispute. The charges were eventually dropped, but reports say Carmen tore Rodman’s shirt during the fight and scratched him up pretty bad.  Years later, Carmen talked about the relationship on Oprah’s Where Are They Now?

“Our relationship was very passionate. When it was good, it was amazing. And when it was bad, it was the worst.” If you’re a fan of reality TV, then you probably know all about the six-foot-tall former model, Kelly Bensimon. She was a cast member on the Bravo show The Real Housewives of New York City. Police arrested Bensimon back in 2009 for punching her fiancé, Nick Stefanov, in the face during an argument inside their apartment. According to the police report, she left him with a nasty laceration under his left eye. Initially, she was charged with third degree assault, but the charges were later dropped after Stefanov failed to show up to court. This one probably doesn’t surprise you. The former Olympic skater just seems to love trouble, and she found plenty of it after throwing a hubcap at her live-in boyfriend, Darren Silver. She also left him with a bloody face after punching him several times. She was arrested on charges of fourth-degree domestic violence.

A few years later, she decided to join a sport where she could legally punch people. She made her official boxing debut in 2003, losing a four-round decision. She ended her short boxing career with an overall record of 3-3-0. This one surprised me when it happened. The adorable Emma Roberts apparently has a violent temper. Back in July of 2013, the 24-year-old actress was taken into custody in Montreal after getting into a brutal fight with her boyfriend, Evan Peters. He reportedly had bite marks on his skin and a bloody nose when police arrived. And as you might have expected, no charges were pressed against the actress because Mr. Peters wanted to work things out with her.

They ended up getting engaged just months after the incident, but sources say the couple called off the engagement last month. A source told PEOPLE the following…

“They grew apart. They both had a lot of growing to do and it was better that they do it on their own.”