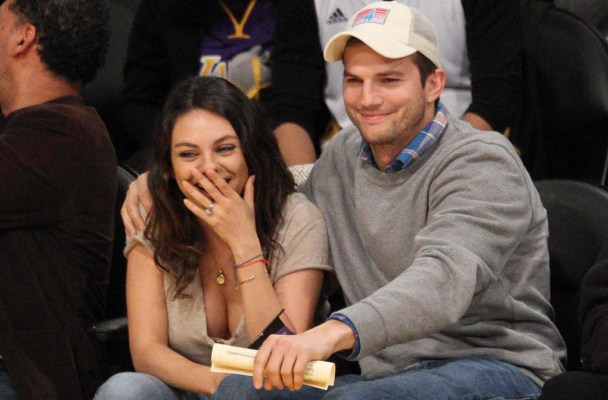 Because Mila Kunis is so adorable, and because people still remember them as Kelso and Jackie from That ’70s Show, fans all over the world have been extremely supportive of their relationship. After all, Mila admitted her first real kiss was with Ashton on the show.

People love a good romance story, and they certainly have one with Ashton and Mila. And now the power couple finally said “I Do” over the Fourth of July weekend during a private wedding ceremony. Sources say the secretive event went down at The Secret Garden at Parrish Ranch in Oak Glen, California.

That’s pretty much all we know right now. Their reps still haven’t confirmed the news, but with almost every website reporting it, we feel it’s only a matter of time. Back in March, the 31-year-old actress was asked by late night host James Corden if she had married Ashton. Her response was interesting, “I don’t know. Maybe.” She said.

Obviously, you know if you are married. It’s not like he asked her if she was hungry and wanted to go grab a bite to eat after the show. You are either married or you are not.

If all the reports are true, this will be the first marriage for Kunis. Of course, it will be Kutcher’s second after he (possibly) cheated on his first wife, Demi Moore. Their divorce was finalized in November of 2013.

For you hardcore Kunis fans, the news of a private wedding probably doesn’t surprise you. Last year, she spoke to W Magazine and seemed to be in love with the idea…

I never wanted to get married. From the age of 12, I prepared my parents for no marriage. Then things changed — I found the love of my life. Now my theory on weddings is: Don’t invite anyone. Do it privately and secretly. My parents are okay with that.

That’s actually pretty adorable. And even though Ashton can be a huge douchebag, he does seem to have a good heart. This speech he gave at the Teen Choice Awards was pretty freakin’ great…