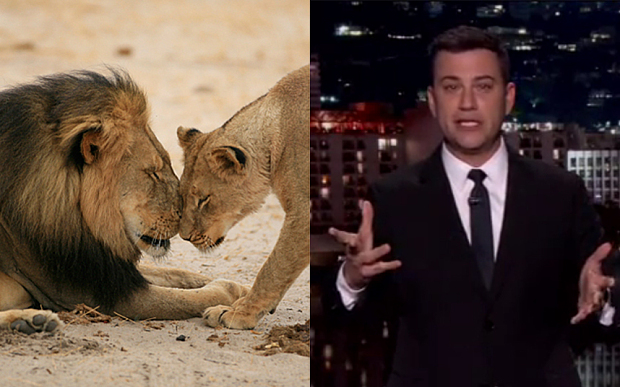 Must Watch: Jimmy Kimmel Gets Emotional While Talking About The Murder Of Cecil the Lion

I’ll be completely honest. I didn’t know much about the recent murder of 13-year-old Cecil the Lion, but last night that all changed. I was watching Jimmy Kimmel’s opening monologue before going to bed. I was prepared to laugh at some silly jokes, but Kimmel had something important to discuss last night.

For those who don’t know, the lion was murdered during an illegal hunt in Zimbabwe. A dentist from Minnesota paid $50,000 to shoot and kill Cecil, “According to the news, he hired a company. He flew to Zimbabwe. Two locals took him to the national park. They tied a dead animal to the back of the jeep to lure the lion out of the park because it’s illegal to shoot them in the park. They call it baiting.” Kimmel explained.

The only reason we know this is because the lion was wearing a GPS collar as part as an Oxford University research project, “They’d been tracking him for years, and during that time Cecil became like a local favorite amongst the guides.”

Please watch the video below to hear the whole story. You may laugh a few times, but you will also probably cry a few times as well.

Jimmy made a good point in the video. It doesn’t help anybody if we only focus on the hate we have for the dentist. He’s clearly a terrible person. He will have to live with that for the rest of his life. That’s good enough for me.

Let’s turn this passion and anger we feel into something special. If you can, click on this link to the Wildlife Conservation Research Unit at Oxford and make a donation.