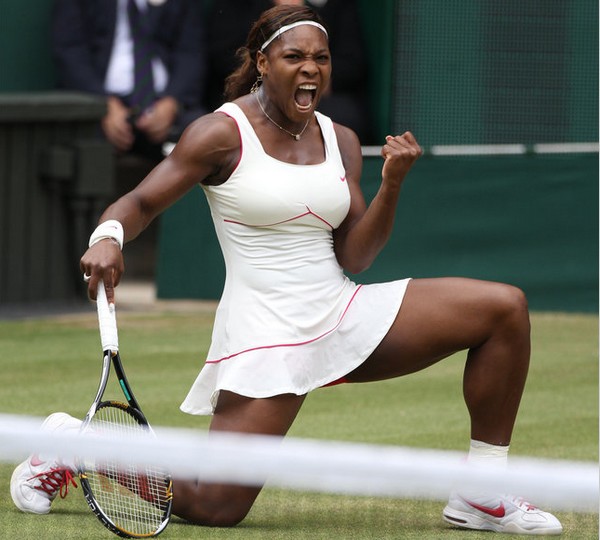 Money can’t protect you from everything. It can help you recover from a lot of things. It can make sure you receive the best care in the world after bad things happen, but it can’t prevent those bad things from happening.

Don’t believe me? Just take one look at Donald Trump. He is filthy rich and he still can’t find a doctor brave enough to remove that thing growing on his head. That’s just one example, though. You would think an incredible athlete like Serena would be immune from any life-threatening conditions, but that’s obviously not the case. The legendary tennis player was having trouble breathing back in 2010/2011. “It got to the stage where it felt like I could hardly breathe. Some days I didn’t get out of bed at all. I just laid on a couch thinking why has this happened to me?” She said.

Doctors discovered she had several blood clots in both lungs, “I was on my death bed at one point – quite literally. I’ve had a serious illness but at first I didn’t appreciate that.” Thankfully, after a few successful surgeries, Serena fully recovered and returned to the tennis court to kick some more butt. In a documentary called ‘How To Make Money Selling Drugs‘ the 42-year-old rapper talked about his scary addiction to prescription pills, which resulted in a near-death experience. He discussed how he felt after he took his first Vicodin, “It was like this feeling of ‘ahh.’ Like everything was not only mellow, but didn’t feel any pain.” And at the time, he didn’t see anything wrong with it, “I’m not out there shooting heroine. I’m not f–king out there putting coke up my nose. I’m not smoking crack.”

“Had I have got to the hospital about two hours later, I would have died. My organs were shutting down. My liver, kidneys, everything. They were gonna have to put me on dialysis. They didn’t think I was gonna make it.“ Sean Kingston actually almost died twice following a terrible jet-ski accident. The hip-hop star was in control of a jet-ski when it smashed into the Palm Island Bridge. He almost died right there, but was saved by a good Samaritan who managed to keep Kingston’s head above water.

After spending 11 days in the hospital, recovering from several serious injuries, it looked like Mr. Kingston was in the clear. He was about to be released from the hospital, but then he started to complain about a stabbing pain in his chest. He had a torn aorta that required open heart surgery.

A doctor who worked on the star told NBC the following…

“He tried to die a couple of times with us, but we refused to let him die.” Sharon Stone is one tough lady, but back in 2001, she was crippled with a severe pain. She felt like she had been shot in the head. The actress was rushed to the hospital, “I called my mom and I said, ‘Mom, I’m calling you from the emergency room…I’m having a brain hemorrhage.'” she recalled during her Oprah’s Master Class interview.

“I had to learn to walk, hear, write, talk, remember and everything all over again. I thought that I was dying for a long time, even after I came home.”

The experience ruined her life. She got divorced in 2004, four years later a judge granted her ex-husband full custody of their son, and she was having trouble landing any jobs out in Hollywood.

“I was burned to the ground. Because everything I had been before, I thought, ‘I’m not any of those things anymore.’ Every death is a rebirth.” Some of you might remember hearing about Travis Barker’s horrific plane crash in 2008. The Blink-182 drummer was in a plane with six people when the crash happened. Four people were killed, but Barker and one other person managed to survive. He was hospitalized in critical condition with severe burns. Doctors put him on 21 different medications to ease the pain and told him he’d probably need them for an extended amount of time; however, Barker refused to take any pain pills after leaving the hospital.

Why? Because he was addicted to painkillers before the accident…

“I can proudly say I didn’t even take any pain medication after I got out of the hospital. They told me I’d be on some of the medicine for the rest of my life, but I got off all of them.”

He claims the accident changed his life for the better. He’s now happier and healthier than he’s ever been. His bank account might be dead, but his heart is still going strong, even after being shot nine times during a near-fatal attack. He was shot in the arm, hand, both legs, hip, chest, and left cheek. He spent 13 days in the hospital trying to recover from the incident.

In his autobiography, he wrote about the painful experience…

“After I got shot nine times at close range and didn’t die, I started to think that I must have a purpose in life … How much more damage could that shell have done? Give me an inch in this direction or that one, and I’m gone.”

Reports say it took him almost 6 months to fully recover from the shooting. He was forced to use a walker for the first six weeks. Aaron Cater has made it clear that he will only die for one thing: a chance to win back the love of his life Hilary Duff. Thankfully, she doesn’t seem all that interested in him anymore, so Carter will continue to live his life.

But back in 2005, his life almost ended. He was driving on the Florida Turnpike when a mattress came flying off the truck driving in front of him. The mattress wedged itself under his vehicle and burst into flames, which quickly set fire to the vehicle he was driving. The 27-year-old singer was able to pull over and jump out of his vehicle before he turned into Aaron Charred. You can add Sandra Bullock’s name to the long list of celebrities who have somehow survived plane crashes. Back in 2000, when the actress was just 36-years-old, she and her then-boyfriend Bob Schneider were flying to a resort town in Wyoming for Christmas vacation. The plane, a twin engine Hawker corporate jet, skidded off the runway and split apart.

Bob, Sandra, and the two crew members all walked away with only minor injuries. You all probably know about this one. Before Kanye West was having babies with Kim Kardashian, he was just some rapper/producer trying to get people to listen to his music. And on October 23, 2002, his life and career changed in a big way. He fell asleep at the wheel while driving home from the recording studio after working late. The near-fatal crash left him with a shattered jaw, which of course had to be wired shut. Two weeks after entering the hospital, he recorded the song Through The Wire at the Record Plane Studios while his jaw was still wired shut.

He had to have facial reconstructive surgery after the accident, and some people believe that’s the reason he doesn’t like smiling in front of cameras. However, Kanye recently revealed the real reason he doesn’t smile for the camera…

“I saw this book from the 1800s and it was velvet-covered with brass and everything. I looked at all these people’s photos, and they look so real, and their outfits were incredible, and they weren’t smiling. People, you know, the paparazzi, always come up to me: ‘Why you not smiling?’ And I think, not smiling makes me smile. When you see paintings in an old castle, people are not smiling because it just wouldn’t look as cool.”