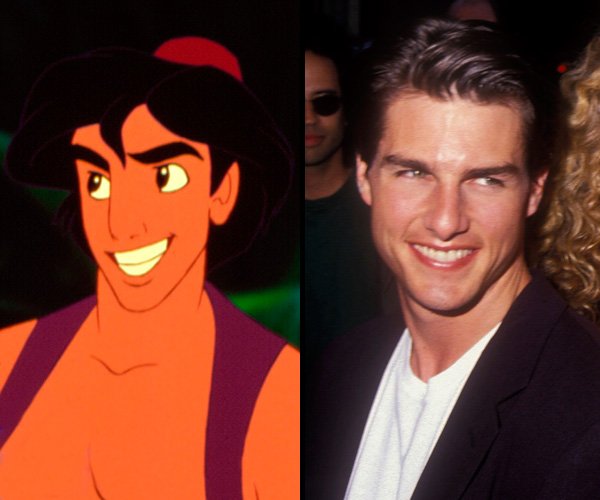 Honestly, this probably happens more often than we think, and we’re willing to bet that some creators aren’t even aware they are doing it. The five characters you see below were all calculated moves though.

Check out the madness below… No. 5 – Alien Is Obviously Riff Raff In “Spring Breakers”

Sadly, we all remember James Franco’s performance in Spring Breakers. It’s just something you can’t erase from your mind, and the memories are probably even more intense for rapper Riff Raff. Back in early 2012, the director/writer of the movie contacted him about appearing in the upcoming film. For some reason, the deal didn’t go through and James Franco was hired to play a character named Alien, which looks and acts a lot like Riff Raff in real life.

Everyone noticed the resemblance, and in July of 2013 Riff Raff announced he was going to sue the creators of the film for $10 million for “sampling” his life without permission. The case was eventually dropped.

Mr. Franco claims his character was based on some underground rap artist named Dangeruss, which almost sounds too good to be true. No. 4 – Jeff Dowd Is The Real Lebowski

Some of you may already know this, but just sit quietly while the rest of class finishes their work. The Coen Brothers primarily based Jeff Bridges’ “The Dude” character on a film producer named Jeff Dowd, who you can see in the middle of the photo above. Just like the character in the movie, the real Dude was a member of the anti-war group the Seattle Seven, and his friends had been calling him The Dude for years. No. 3 – Cartman’s Mother Is Based On Trey Parker’s College Fiancée

Generally, when you tell someone, “Hey, I put you inside my TV show!” It’s considered a good thing. People are excited and flattered, but that’s probably not the case with Liane Cartman. If you watch the show, then you know Cartman’s mother is known for her, uh, promiscuity. Almost all of the adults in South Park land have slept with Liane, even total strangers and other women.

So who is the character based on? Co-creator Trey Parker’s cheating fiancée, who was also named Liane. Apparently, she cheated on him just one month before their wedding.

Taylor Swift would be proud of your work, Trey. She told Wendy Williams the following…

“I didn’t know that when it was going on. But they asked me to host ‘The Making of “The Little Mermaid,”‘ and it came out there that the drawing and likeness of the little mermaid was based on pictures of me from when I was younger.”

That’s a conversation starter. How would you like to pull that fun fact out during a party? “Hey, how are you doing? Did you know Ariel from The Little Mermaid was based on pictures of me? No big deal or anything. Just thought you’d like to know. What are you doing with your life?” No. 1 – The Tom Cruise “Aladdin” Connection

Yes, it’s true. Animator Glen Keane used parts of teen idols and movie stars to create Aladdin’s appearance. Originally, his inspiration was from Michael J. Fox in Back to the Future, but that somehow changed to Tom Cruise. And to make this even stranger, animators also studied the movement of MC Hammer’s pants to make Aladdin’s loose pants realistic as possible.