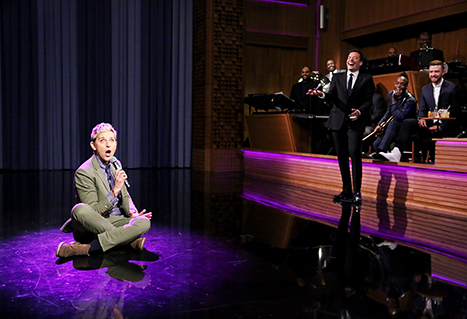 Watch: Jimmy Fallon And Ellen DeGeneres Team Up For One Of The Best Lip Sync Battles In History!

You can complain about his fake laughter all you want, but Jimmy Fallon sure does know how to put together an entertaining show. Ellen DeGeneres stopped by The Tonight Show to take on Fallon in an intense Lip Sync Battle.

Best of all? Justin Timberlake was there to judge the event. And we’re going to continue with our “no spoilers” promise. We could easily tell you all the songs featured in the video below, but then you wouldn’t be surprised! It takes away from the experience.

So, watch the video, and then we’ll discuss things below it.

I don’t know about you, but I disagreed with Timberlake’s decision. Ellen definitely grabbed the first round, but I felt like Fallon KILLED IT during that second round. His Nae Nae was on point. You can tell he had been practicing those dance moves.

And while Ellen picked a great song (Bitch Better Have My Money) I didn’t believe the attitude she was spittin’. It felt fake to me. I didn’t believe she truly wanted her money back. THAT’S YOUR MONEY, ELLEN! FIGHT FOR THAT SH-T! Get nasty, break some legs, kick some kittens, throw rocks at old people. Do something! Make me believe it.