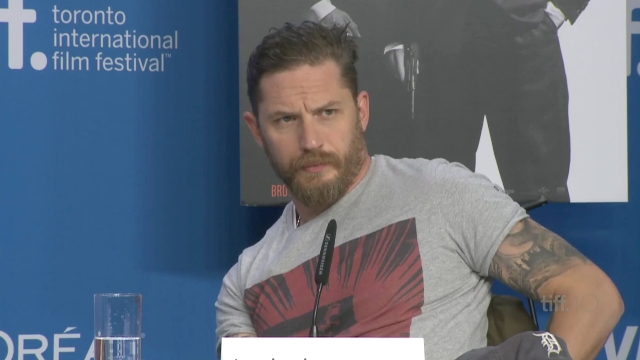 Reporter Questions Tom Hardy’s Sexuality During Press Conference, Watch How He Responds Inside! We have been having a lot of fun with press conferences lately. You had Serena Williams spittin’ the truth during a post-match conference last week, and now you have 37-year-old actor Tom Hardy. He’s one of the hottest stars in Hollywood this year after starring in Mad Max: Fury Road.

Hardy was at the Toronto International Film Festival this weekend promoting his new film, Legend. In the film, which is scheduled for an October 2 release, Hardy plays identical twins Reginald Kray and Ronald Kray. The lovely Emily Browning plays Reginald’s wife, and Taron Egerton plays Edward “Mad Teddy” Smith, a gay man who allegedly had affairs with Ronald.

And apparently, there are still some people wondering if Mr. Hardy is having any affairs with gay men. As some of you may know, Hardy was interviewed by Attitude magazine back in 2008. During the interview, he was asked if he’d ever had sexual relations with other guys, he responded, “Of course I have. I’ve played with everything and everyone. But I’m not into men sexually. I love the form and the physicality but the gay sex bit does nothing for me.”

He later came out and said his words were “misconstrued,” and ever since then he has tried to avoid any questions about his sexuality. So when a reporter for the LGBT site Daily Xtra asked the actor if it was hard for celebrities to talk about their sexuality, it kinda seemed like a relevant question.

The movie he is promoting talks about it, he talked about it in the past….I mean it makes sense to bring it up, especially if you’re working for the Daily Xtra. However, Tom Hardy seemed confused by the question, and basically proved that it is extremely hard for celebrities to talk about their sexuality.

Check out the awkward moment below. It starts just after the 28:00 mark.