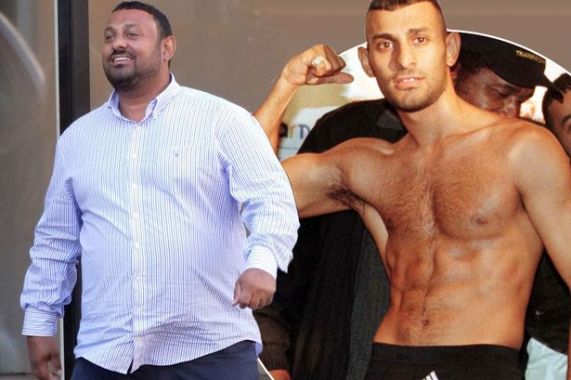 Prince Naseem was a boxing legend. His trash talking was backed up by his Popeye shaped legs, his awkward but hard to beat boxing style, his over the top grand ring entrances and most importantly, his knock out punch. He was Britain’s youngest champion earning the belt at just the age of 21. He reigned on top until he got beat by Marco Antonio Barerra. Naseem would have only one fight after his loss to Barerra and that would prove to be his last. He told fans he would be back but rumor has it that injuries to his hands proved to be too much to overcome. He ended his career with impressive stats including 31 knockouts out of 37 fights. He would retire 37 in 1.

WAS THE PRINCE REALLY LOCKED UP?

Yes! On May 2nd of 2005, Naseem was driving his SLR McLaren when he caused an accident while travelling at speeds of 90 mph. Although he managed to escape uninjured, the man that he hit broke every major bone in his body.

That day Naseem was driving with business man Asif Goro. He was trying to show off in is SLR and he attempted to overtake the car that was ahead of him. Naseem crossed a solid white line to make the pass. Those lines are solid for a reason…. This one was solid because the road ahead dipped down, which made it difficult to see if a car was coming or not. As Naseem pulled out to pass the car in front of him, he sees a Volkswagan Golf approaching him, driven by 38 year old Anthony Burgin. Naseem hit the Vokswagan head on, breaking every major bone in Burgin’s body and causing him to bruise his brain. He also struck the Ford Mondeo that he was attempting to pass. Hamed was sentenced to 15 months after pleading guilty. Of that time, he only did 16 weeks before getting released on house arrest. At that time he also began to take on massive amounts of weight.

BOXERS ARE SMALLER THEN YOU THINK

Naseem, despite his huge on screen and in ring presence, stands only 5 ft 4 inches tall. He fought at a weight of 126 lbs. Your average American woman is 40 lbs heavier than Naseem at his fighting weight and 1 inch taller and could probably also whoop his butt. However your average 126 lb boxer didn’t stand a chance.

Boxers typically start boxing from their teens. They are always getting ready for a fight or recovering from a fight but in doing so they need to be very weight conscious. Training regimens are tough and eating and gaining weight is only a concern as it relates to boxing. Once a fighter retires, his body is doing substantially less work and their metabolism slows naturally because of age which presents a double whammy for many ex athletes.

Prince Naseem looks as if he’s finally lost his second fight: That one is the Battle of the Bulge. WHAT’S THE PRINCE UP TO NOW?

Like many ex-fighters he is into sport management and boxing promotions. He has established the “Team Naseem” brand. He says that he is simply an adviser,

I have a lot to offer any fighter who is reaching title fight level.
I don’t wish to promote fighters, I don’t want to manage them but I do want to ensure they fulfil their potential.
I can work as an adviser to a camp, career guidance to an up and coming fighter, consultant for a fighter preparing for a big fight.

THE ERA OF THE TRASH TALKER IS OVER

Trash talking and boxing go hand in hand. This creates a very polarizing audience. If you do it right, you will get as many people cheering for you as you will have people wanting to see your big mouth get shut. With the recent retirement of Floyd Mayweather there is a lack of flamboyant fighters with the skill to back up their loud mouths. Naseem was one of them…at last 36 times he was. Here are some highlights