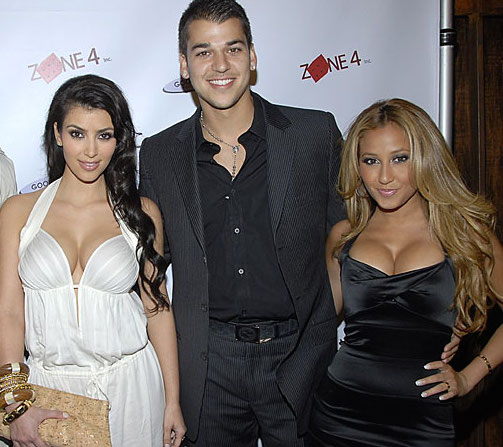 Rob Kardashian And Adrienne Bailon Back On? The Former Cheetah Girl Addresses The Rumors!

Now that Rob Kardashian is healthy again, and more importantly back on Instagram, rumors have started to slowly creep their way back into his life. As some of you may remember, Rob started dating the lovely Adrienne Bailon back in 2007.

And their relationship was pretty serious at the time, Bailon even appeared in eight episodes of Keeping Up with the Kardashians. But in 2009, the couple decided to end their relationship. A few months after the breakup, rumors started to spread that Rob actually cheated on Adrienne.

In any event, they moved on with their lives. Adrienne found herself a new man named Lenny Santiago. Earlier this year, the singer/actress announced their engagement on Instagram; however it doesn’t look like a wedding will ever happen. Last month, the former couple decided to call off their engagement. Where does that leave us? Well, both Rob and Adrienne are single again, which means those dirty sources are trying their best to start some trouble. Earlier this week, Bailon was asked about the dating rumors during the Latina magazine Hot List party…

I think he’s a great guy and I always wish him well, but the rumors are going to go crazy. It is what it is.

Doesn’t sound very promising, and honestly that’s probably for the best. Bailon started a mini-feud with the Kardashian family last year when she revealed she regretted being on their reality show.

To be stuck with that Kardashian label, that was so hurtful to me and to my career. To this day, people will still say, ‘You ruined Rob’s life!’ and I’ll think, Damn, I was still playing with Barbie dolls when I met him.

She’s since apologized for the comments, but we all know the Kardashian family never forgets. Just ask poor Lamar Odom…