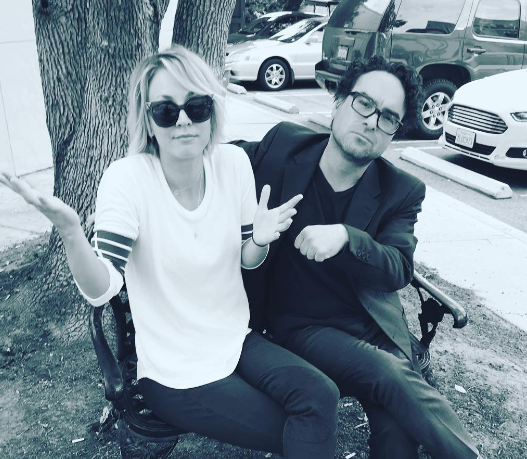 Penny And Leonard Back On In Real Life? Kaley Cuoco Talks About Those Johnny Galecki Dating Rumors! Aw, snap! Could America’s favorite non-couple be getting back together? Kaley Cuoco is newly single after ending her marriage with Ryan Sweeting. The split shocked many people last month. After all, they had only been married for two years.

And what happens when a celebrity couple decides to get a divorce? Rumors. So. Many. Rumors. You remember the drama surrounding Blake Shelton and Miranda Lambert‘s divorce? Lawd hammercy! According to those “sources” Shelton and Lambert were basically sleeping with everybody in country music.

The rumors surrounding the Sweeting/Cuoco split aren’t quite as intense; however, there is one that just won’t go away. Many people want to believe Kaley’s close relationship with her co-star Johnny Galecki caused the trouble with her marriage. As some of you may know, the two stars secretly dated each other for two years during the first two seasons of The Big Bang Theory.

Now fans want to believe their relationship is back on. They just know in their hearts that Johnny destroyed Kaley’s marriage.

But that’s just not the truth, according to the 29-year-old actress. She went on her Instagram account to shut down the rumors. She posted the photo you see at the top of this page, with the caption you see below…

So sorry to disappoint, but no home wreckers or secret flings going on here. Me and @sanctionedjohnnygalecki are just the best of buds – Leonard and Penny will just have to suffice!!!

And Mr. Galecki had her back, he posted a similar photo with the simple caption, “No scandals / home wreckers / pregnancies here, y’all. Just profound friendship.”

Sorry, folks. We know all you Big Bang fans were hoping they would get back together, but it looks like they’re comfortable with just being best friends.

Please allow the adorable GIFs below to warm your heart…