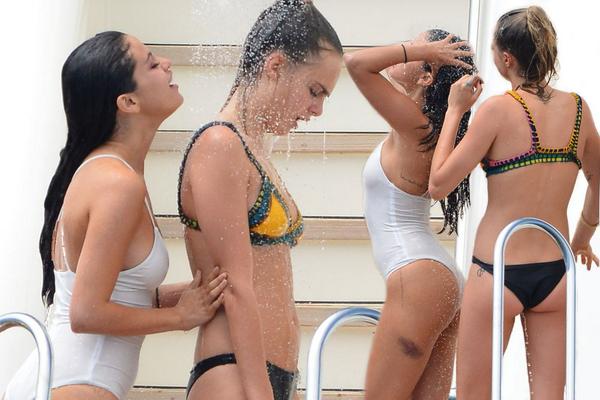 Selena Gomez Has “Of Course” Questioned Her Sexuality, Claims She Loved The Cara Delevingne Dating Rumors!

Some of you might read that headline and think, “Well, duh. She dated that Justin Bieber chick for like three years.” We hate to shock you so early on a Friday, but Justin Bieber is actually a dude, and according to those people who saw his nude photos, he’s a pretty big dude.

Truth is, Selena Gomez has never been in a relationship with another woman; however, she has questioned her sexuality before. In an interview with PrideSource, the 23-year-old singer/actress talked about how it’s healthy to think about those things…

Oh, I think everybody does, no matter who they are. I do, yeah, of course. Absolutely. I think it’s healthy to gain a perspective on who you are deep down, question yourself and challenge yourself; it’s important to do that.

She was also asked about those Cara Delevingne dating rumors. For those who don’t remember, the rumors started after photos of them getting super close with each other on a yacht went viral.

Selena claims she actually enjoyed the rumors for once, because I mean who wouldn’t want to date a freaking supermodel?

Honestly, though, she’s incredible and very open and she just makes me open. She’s so fun and she’s just extremely adventurous, and sometimes I just want that in my life, so I didn’t mind it. I loved it.

It seems like everyone loves Cara. You see her hanging out with several celebrities, and in almost every freaking photo, the celebrity looks like they are having the best time of their life. I could go on, but you should get the point by now. Cara must be one amazing friend. I’d love to do anything with her, even picking up dog poop at the park. She’d probably make it enjoyable somehow.