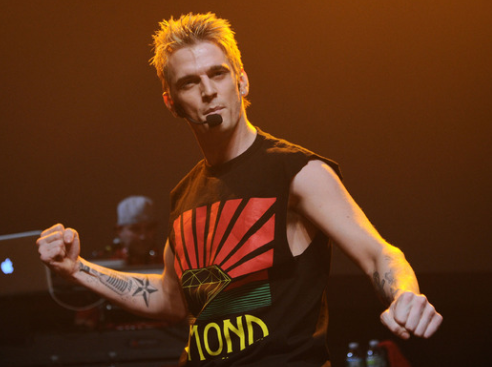 Aaron Carter Is A Mess, Claims Michael Jackson “Passed Down The Torch” To Him In Bizarre Tweet!

We can all agree that Aaron Carter is a strange dude, right? I think we all saw it coming the moment he made his infatuation with Hilary Duff public. He seems like the type of guy who would buy a girl a chocolate factory instead of a box of chocolates, which doesn’t necessarily sound creepy until you realize this is all happening on the first date.

Anyway, this story is not about his dating life. It’s actually about his career…something he apparently thinks he still has. Not only does he still believe in his music career, he believes that he is the next Michael Jackson.

In a now-deleted tweet, Carter told his followers that Jackson passed the torch to him before his death…

Remember one very important thing. Michael passed down the torch to me. I never had to ask for him to do that.

He did what now? When did this happen? Why would he do such a ridiculous thing? These are questions Twitter needed to know the answers to.

I guess you could say Carter tried to explain himself? Do you think anyone has ever won an argument by ending their defense with, “like stfu people jeez”. If anyone has any examples, please leave them in the comment section below.

I will say he did make more sense with his last message on the subject; however, this was after he wrote, “I need to grow and be the best man I can be and my love is pure it started just as young as MJ and that’s why we both connected because we really were and still [are] the only ones of our kind.” So I think even he confused himself during this strange event.