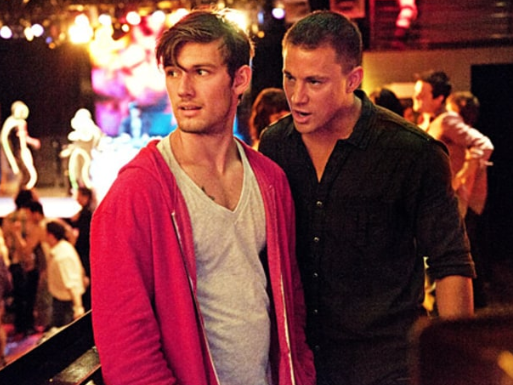 Magic Mike Drama: Alex Pettyfer Claims Co-Star Channing Tatum Did NOT Like Him At All! Are you a fan of podcasts? You should be. Delicious drama gets revealed on them every single day. For some reason when celebrities go on a podcast, they treat it like a private conversation between friends.

25-year-old actor Alex Pettyfer was the latest podcast victim. During a recent appearance on the B.E.E. podcast, Pettyfer revealed that his Magic Mike co-star Channing Tatum did not like him. In fact, it almost sounds like he hated him.

He claims that shooting the movie was an incredibly unpleasant experience. No one really talked to him because Tatum told everyone he didn’t like the guy…

I was scared to speak. I actually did my work, and I sat in the corner and listened to music because I had been told that anything that I do was wrong by my reps.

That also gave me a bad rep because they said, ‘Alex thinks he’s f–king better than anyone else because he doesn’t speak to anyone.’ That’s not true. I was just genuinely nervous and scared to be myself.

If you are thinking this story sounds strange…don’t feel alone. From all the reports we have heard from people who have worked with Tatum, this does not sound like something he would do. Gossip to everyone on set, basically warning people to stay away from Alex? Sounds like something reserved for high school. But as Alex mentions in the podcast, Tatum apparently had a legitimate beef with him. Alex rented an apartment in New York from one of Tatum’s friends; however, he moved out shortly after moving in because he complained of breathing troubles from mold and dust inside the apartment.

All of a sudden I got a very negative email from Channing, rightfully so, saying, ‘Don’t f–k my friends. You owe money. Pay the f–king money. Don’t be a clown.’ I really took that the wrong way, which I shouldn’t have. And emailed him back saying, ‘I’m in a negative headspace, can you respect me for a moment?’

Honestly? I don’t think we’re getting the whole story here. There probably was some apartment drama, because that would be an odd thing to just make up, but we’re willing to bet Alex’s troubles on set had more to do with his poor attitude than Tatum telling everyone to avoid him.

We have heard from sources before who claim Pettyfer developed a huge head after landing the role. Of course, it could have been Tatum spreading those rumors around.

This is why you never f–k with the star of the movie.