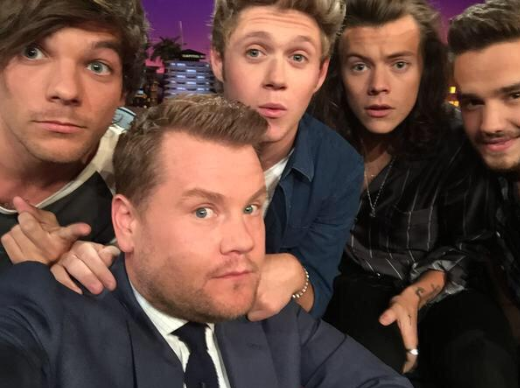 It looks like late night shows are running out of ideas. Thanks to all the games Fallon plays on his show, the other late night hosts were forced to get creative. Some of them have thrown in the towel, but James Corden refuses to back down.

The Late Late Show host had some special guests on his show Thursday night. The boys from One Direction stopped by to play a little game of Tattoo Roulette. The instructions were pretty simple. Harry, Niall, Liam, Louis, and Corden each had to pick a box. Four of the boxes had the word “safe” inside while one had “tattoo.”

If it was Corden who picked the tattoo box, he would have been forced to get a “1D” tattoo. If one of the band members got that unlucky box, they would be forced to get a “Late Late” tattoo.

Niall is apparently the only member of the band not to have a tattoo, so he was understandably a little nervous before playing, “I’m regretting you thought of this game. I don’t like this!” He then proved his nervousness by letting everyone see how badly his hands were shaking.

We won’t spoil the ending for you. Watch the video below to be surprised!