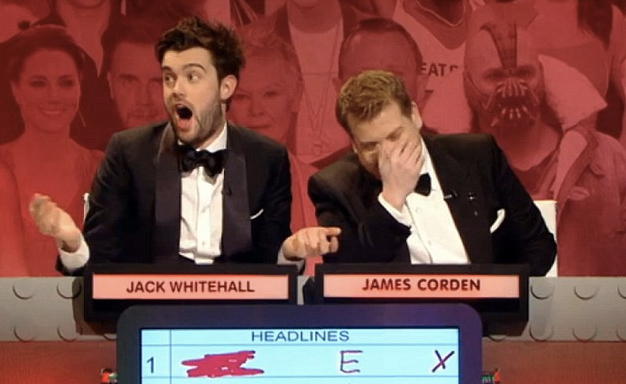 Does anyone else watch Episodes? If you’re in the states, you can find the fantastic show on Showtime. In the UK, the show airs on BBC Two. I could easily write a chapter on why you should watch the show, but it’s not the focus of this post.

In fact, I only bring it up because it introduced me to English actor Stephen Mangan. He’s one of the best parts of the show (along with Daisy Haggard), so I decided to look him up on YouTube, because I am a huge nerd and love watching random interviews with my favorite celebs.

But what I found was much more than just your standard late-night talk show interviews. I found Stephen on a little show called ‘Would I Lie to You?’. Basically, a bunch of celebrities in the UK share hilarious stories with each other, and try to figure out if the stories are true or false. The brilliant David Mitchell is a “team captain” on the show, so you know it’s entertaining and full of wit.

So after watching multiple episodes of this show, I locked myself in my bedroom and wasted several hours watching more brilliant comedy panel shows from the UK.

Here are a few of my favorite moments. And yes, I realize I am probably late to the party. Maybe that would change if you people actually invited me to the party.

If you don’t laugh at least once while watching this video, you’ll probably want to click on another story because this post obviously isn’t for you.

The Big Fat Quiz of the Year is one of my favorites. Sadly, it only comes on once a year, but the good news is you can watch most of the old airings on YouTube! According to Wiki, they just recorded a Big Fat Quiz of Everything special last month. I’m not sure when it’s scheduled to air, but according to the report, the greatest team in history will be back.

Can you imagine a celebrity in the United States doing this? They would probably never find work again. Over there, you are allowed to be funny and offend people. It’s crazy! You don’t have to end every joke with, “I’m sorry.”

No. 3 – “Never Mind the Buzzcocks” – Huey Morgan The Mug Smasher

Never Mind the Buzzcocks, the British comedy panel game show centered around pop music, had a wonderful 18-year run on BBC Two. It aired from 1996 to 2014.

This is one of the more memorable moments from the show, but there is too much gold to fit in one post. I suggest you check it out on YouTube. Full episodes are available…for free!

We have similar arguments here in the U.S., it’s just usually they involve the temperature inside a Hot Pocket.

No. 1 – Best of Richard Ayoade

I’ve been trying keep the videos short, but I just had to end with a long masterpiece. Richard is probably my favorite person on the planet right now. Hopefully you’ll agree with me after watching the hilarious “best of” video above.