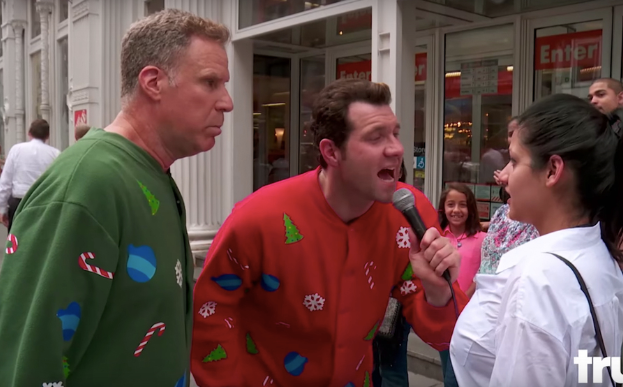 I don’t know about you, but I haven’t been feeling the Christmas spirit lately. Maybe it’s the fact that more and more people seem to be dying in nonsensical shootings around the world, or maybe it’s just because the only Christmas card I have received in the mail was from a doctor’s office I visited three years ago.

Either way, I needed something to get me ready for the holidays, and thanks to Will Ferrell and the great Billy Eichner, I have found that thing. During the latest episode of Billy on the Street, Buddy the Elf (Ferrell) joined Billy on the streets of New York City to scream at unsuspecting strangers.

And did I mention that they are wearing red and green decorated onesies? I don’t believe I did, but you probably already noticed this in the photos above…SO JUST FORGET I SAID ANYTHING!

Watch the hilarious video below. You will not be disappointed.

Billy On The Street: Christmas with Will Ferrell! from Billy on the Street

The 4th season of Billy’s wonderful show premiered on TruTV back in October. Several of your favorite celebrities have already appeared, including, Chris Pratt, Tina Fey and Julianne Moore. It’s one of the best shows currently airing on a network you probably assumed was filled with “Top 20 funniest times someone fell inside McDonald’s” specials.