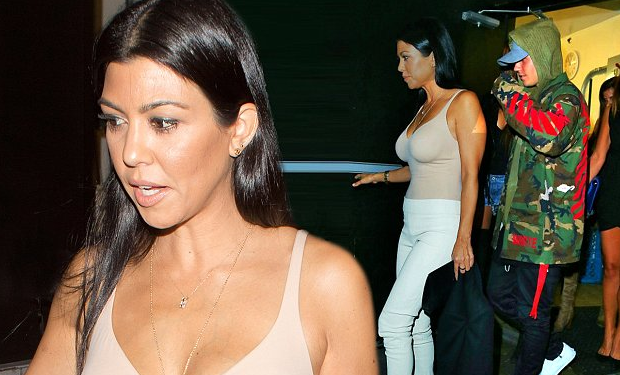 Kourtney Kardashian Claims She Didn’t Hook Up With Justin Bieber, But Everyone (Including Her Family) Believes She’s Lying! Yesterday we told you about the bizarre hookup rumors between 21-year-old Justin Bieber and 36-year-old (mom of three) Kourtney Kardashian. And surprisingly, this rumor had a little meat on its bones. It wasn’t just a gaggle of sources making noise.

We showed you photos of the two stars hanging out together. Once back in October and then just recently last weekend, where we also have photos of Kourtney leaving the hotel Bieber was staying at. This was at four in the morning, by the way. She looks pretty happy, right? Is it because Bieber hit all the right spots? Was she screaming, “Baby, baby, baby ooohh!” all friggin’ night? It’s certainly possible; however, we should note that Kourtney is denying the hookup rumors.

Sources say Kourtney’s family has been all over her. They basically had an intervention with her, and were like, “Kourt…are you seriously f–king the Biebs?” She denied it. According to the reality star, she has never been in a hotel room alone with Bieber. It’s always been with a group of friends.

No one believes her though. They don’t share a lot of the same friends, plus, insiders with Bieber claim the superstar has been bragging about the sexual relationship for months. One source close to the Biebs told TMZ, “He’s single, she’s single and they’re just having a good time.  Nothing serious.”

One more thing: remember the photo Bieber posted to Instagram on Sunday? Where he was seen chillin’ in a sexual position with a mystery woman against a car? The woman in that photo was NOT Kourtney. Paparazzi at the scene were able to snap a different angle of the now famous picture.