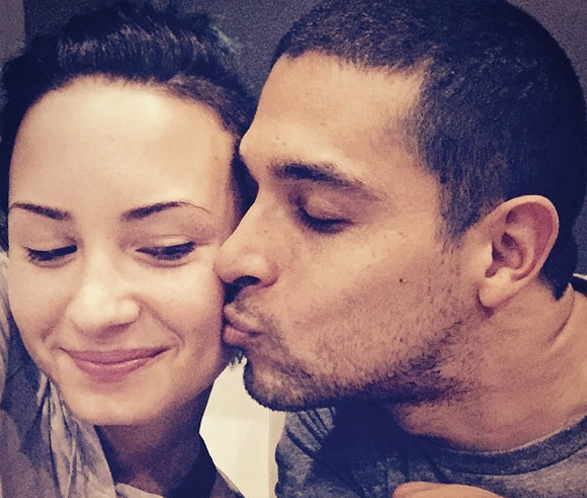 You want to talk about relationship goals? Look no further than Demi Lovato and Wilmer Valderrama. They have been together for five years now, and they are still making us say, “Aww!” because they are just that stinkin’ cute.

The 23-year-old singer and the 35-year-old actor were spotted out in St. Barts earlier this week enjoying their romantic vacation. Photographers caught them in the middle of a make-out session. Wilmer was also seen recreating the famous Dirty Dancing lift with his lover. They have been enjoying their vacation with a few Victoria’s Secret models, as well as Lovato’s close friends Nick Jonas and Joe Jonas. Nick even poked a little fun at himself on Instagram by posting the photo you see below and adding this clever caption, “I’m always third wheel when I’m with you… But I love it.. Yeah I love it ohh @ddlovato @wilmervalderrama #stbarth.” We’re sure those models out there are keeping Nick nice and warm though. After all, they seemed to enjoy his acoustic sunset show a few days ago. But let’s jump back to Wilmer and Demi before we end this post. As we mentioned above, they have pretty much been going strong for five years, and it’s clear Demi is already thinking about marrying Wilmer. In fact, she has a few details already set for the wedding.

How do they maintain such a healthy relationship? One trick is to put away those distracting phones.

We will at dinner not touch our phones because if one of us is talking and then you get on your phone, it’s rude.