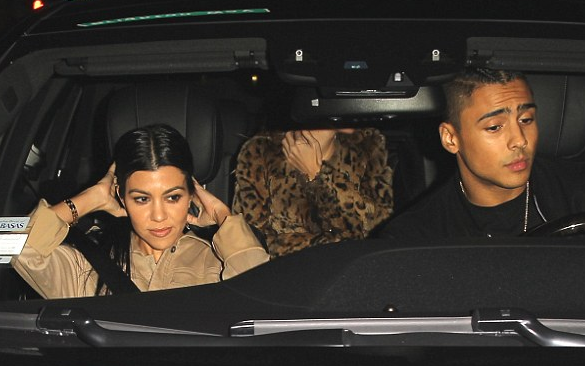 Kourtney Kardashian Spotted With Another Young Male Celeb, Find Out Who It Was Inside! Damn. After finally deciding she had enough of Scott Disick‘s constant partying, it looks like 36-year-old Kourtney Kardashian is ready to relive her 20s again. You all know about the Justin Bieber hookup rumors. We can’t 100% confirm that the Biebs and Kourt did the nasty in a hotel room; however, we would say the chances something happened between them are pretty high.

But is the mother of three already getting bored with Bieber? Is she already sampling some other young meat? Photographers caught her hanging out with Diddy‘s stepson, 24-year-old Quincy. He’s three years older than Bieber but still more than 10 years younger than Kourtney.

They were spotted getting a bite to eat together at Il Pastaio in Beverly Hills, which is apparently one of Scott’s favorite places to eat. Sadly, cameras didn’t catch Quincy and Kourtney kissing or anything like that. Despite some reports, it appears this might have been more of a business date. Sources say they probably know each other from Kris Jenner’s boyfriend, Corey Gamble. But you could also say the same thing regarding her relationship with Bieber, because Gamble worked for Bieber’s manager Scooter Braun, so who really knows what the hell is going on. Maybe Kourtney is putting together a boy band or something. If we see her talking to Harry Styles next, I think we’ll have our answer.

As of right now, it looks like the Bieber romance rumors have more truth than the Quincy romance rumors. There is more evidence supporting a hookup between Kourt and the Biebs. Hell, some sources say Bieber is even great with Kourtney’s kids, “He actually goes over a lot to see her kids, and they love him.” One insider told Us Weekly.