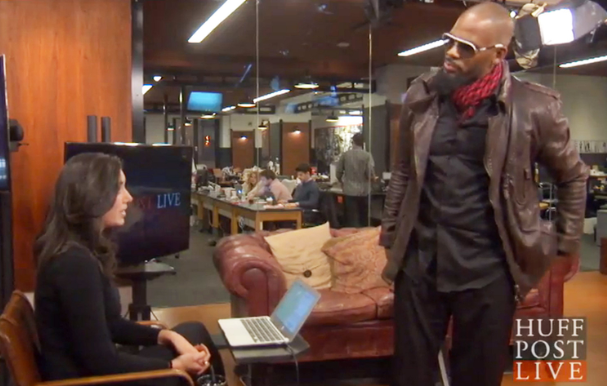 Watch: R. Kelly Walks Out Of ‘HuffPost Live’ Interview After Being Asked About Sexual-Abuse Allegations (VIDEO) For some reason, R. Kelly wants everyone to forget about his disgusting sexual history, which includes years of documented allegations of statutory rape. Reports claim he would even hang around middle schools and high schools in the Chicago area to look for potential dates.

When he was 27-years-old, he eloped with 15-year-old Aaliyah, and then in 2002 (according to Vulture) a young woman claimed the singer got her pregnant when she was still underage and “that one of his associates” helped her get an abortion. Kelly would later settle that case for an undisclosed amount. We could write a novel on Kelly’s disturbing history, but we are sure you have heard it all before.

The 48-year-old went on HuffPost Live yesterday to promote his latest album, The Buffet. For some reason, he expected all of the questions to be about his album. It would be kinda like landing an interview with Bill Cosby and only asking him if he had a favorite sweater.

Host Caroline Modarressy-Tehrani did the responsible thing and asked him about the troubles some fans face when it comes to supporting his music, “Some people say they are conflicted and that they want to support the music … but they can’t support you. I think people find it difficult to not think about … the lawsuits [about having] sexual relations with minors.”

R. Kelly was not having it, “People are conflicted? Can you count them?” He asked.  You can check out the uncomfortable interview below. We have two videos posted below. The first one is directly from HuffPost Live, and it shows what happened minutes before he decided to walk out. The second video shows the intense final minute between Kelly and Modarressy-Tehrani.