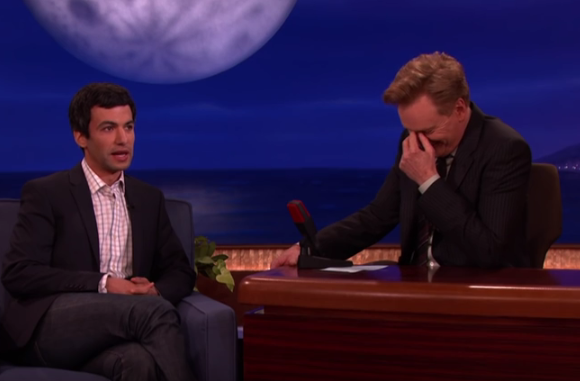 “Genuine laughter? Obviously Jimmy Fallon won’t be on this list!” Actually, he did make the list! I know there are several “Fake Jimmy Fallon Laughter Compilations” out there, but not every single #fallonlaugh is fake. I’ll explain how you can identify the real laughs in his portion of the list below.

Anyway, hopefully the videos on this list provide you with some real laughter, or at the very least maybe a smile or two. And if you feel like I missed an important video, please share it in the comments. I will never get tired of watching these rare moments. It’s refreshing to see with all the fakeness running through Hollywood.

No. 5 – Jimmy Fallon and Amy Schumer

Okay, why do I think this laugh is different from his fake laugh? The eyes. His first laugh in the video above, when Amy talks about how gross his hand looks, seems to be one of those fake laughs. He whips his head forward and brings his face down to the desk. That’s his “normal” laugh we see on the show every single night.

But then around the 1:10 mark, it appears Amy Schumer lands a real laugh from Fallon. The laugh starts out deeper, his eyes don’t close all the way, and he’s not trying to hide his face. He seems more interested in hearing what she’s about to say next, as opposed to rolling around in his chair like someone’s hiding under his desk tickling his feet.

And yes, I realize this proves I desperately need to get a life. I’m working on it.

It doesn’t matter what show he’s on, Bill Burr always takes control. Your job as a host is to give him something to rant about, and then take a step back to watch a miracle happen.

If you want more Bill, click this link to watch another hilarious appearance on Conan.

No. 3 – Craig Ferguson and His Robot

I know Geoff Peterson was Craig Ferguson’s sidekick on The Late Late Show, so this doesn’t exactly fit in with the “guest theme” we have going on here, but this was just too special not to include. Plus, I can’t be the only one missing Craig, Geoff and Secretariat.

Late night television just isn’t the same without Craig. Name me one other current host who would have 10-minute conversations with a freaking robot skeleton, and 10-minute dance sessions with a human-powered horse? YOU CAN’T!

The closest thing we had was David Letterman going back and forth with his robot Paul Shaffer, but they left a few months after Craig!

No. 2 – Conan O’Brien and Nathan Fielder

Justin Bieber might have almost 70 million followers on Twitter, but I think we can all agree Nathan Fielder is the best famous Canadian. If this video is your first introduction to the brilliant comedian, please let this video be your second meeting.

I’ll let you decide if you want to continue the relationship after that.

What? Conan has made the list THREE times?! Maybe Conan is the real king of the fake laugh. Maybe we’re focusing too much on Jimmy Fallon? Nah. Conan just knows when a guest is on a roll. He sits back and enjoys the show like a normal member of the audience.

Besides, how could you not laugh during this story? Every single thing about it was perfect. A story about a dog getting punched on the streets of New York City after almost dying from dark chocolate shouldn’t be this funny.