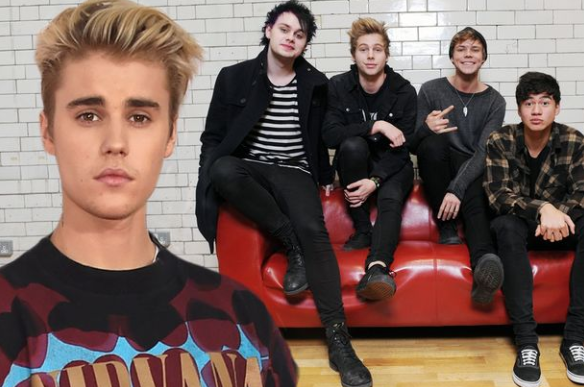 People waiting for Justin Bieber to fail majorly again might be waiting for a long time. We have said it before, but we’ll say it again, the 21-year-old singer is a completely different person now. He’s not the same person he was a year or two ago.

We know this because two years ago, he probably wouldn’t have handled the recent situation with 5 Seconds of Summer as well. The band appeared in the latest issue of Rolling Stone, and for some reason during the interview, the Biebs was mentioned.

Accident-prone guitarist Michael Clifford told the magazine that he believes Justin Bieber hates the band, “I think he hates us.” He said, before talking about the time they were invited to one of his parties…

It was f–king crazy, people standing on tables and s–t. I probably shouldn’t say this, but he had his own album on loop for, like, two or three hours.

Sounds like fighting words, right? Bieber about to come in for the knockout! THIS ROUND WON’T EVEN LAST 5 SECONDS! HA…HA…GET IT?!

Okay, let’s settle down. The Biebs didn’t go in for the knockout after hearing about the comments made by Michael Clifford. Instead, Bieber went on his Twitter account and put an end to this beef before it even had the chance to marinate.

He has since deleted the tweets, but you can read his messages in the quote below…

@Michael5SOS sorry guy. Don’t hate you. Don’t even know u. And are u sure u came to our party because my album wasn’t on loop? Strange. Wish u the best. Don’t use my name for headlines. U are already on the cover. U don’t need it. Just be honest. Big hugs bud. And now we can all move on. No hate all love. Isn’t that sweet? And adding to the sweetness, Clifford responded to Bieber’s message by saying, “Done nothing but praise ur album. No idea why that’s even in the article. Big fan since the start man, take care.”

We’re all good now. No drama to see here.