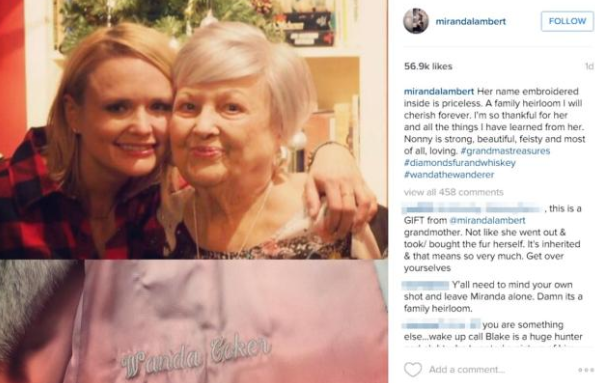 If there’s anything that could be more innocuous, it should be getting a gift from your grandmother right? Well, not when you’re Miranda Lambert. The star got barraged with angry comments after she posted a shot of her gift for her grandmother, a floor length fur coat that was apparently passed down.

It especially doesn’t help when you’re a noted animal rights supporter who founded a home for dogs. Shortly after posting the snap on Instagram, Miranda was treated to responses like this;

Since Miranda rescues dogs, we always thought she could see that whether fur comes from a mink, a fox, or a dog or a cat in China, the source is always a gentle animal who did not want to die.

Of course, considering the fact that the coat was passed down from her grandmother, it’s very likely any animal involved would have died of old age a long time ago. But hey, don’t go getting the PETA activists all confused with facts.

Lambert didn’t comment on the controversy, except to post another picture of her with her grandmother, along with the statement

Her name embroidered inside is priceless. A family heirloom I will cherish forever. I’m so thankful for her and all the things I have learned from her. Nonny is strong, beautiful, feisty and most of all, loving.