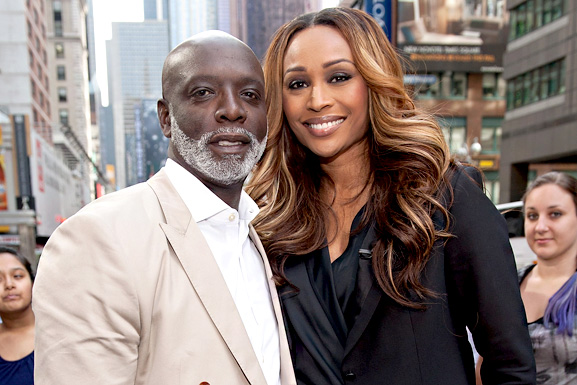 Karma is a powerful thing. We see it all the time, but yet people think that the rules of karma apply to everyone but them. That is what Peter Thomas thought until Christmas. This why I don’t cheat.  The first time I’m ever in a car with someone I’m not supposed to be….I guarantee it will flip too!  The only difference is that I wouldn’t tweet about it.  Until now, we still don’t know who was in the car with Peter but we do know it wasn’t Cynthia.

Cynthia and Peter decided this year to spend the Christmas holiday apart. Cynthia decided to spend the holiday with her daughter Noelle and Leon (uh…um…Leon) in Aspen.

Wow! Was swimming in #Jamaica on #Christmas Eve, woke up in #ATL w/ Bailey (dog) on Christmas, in #Aspen for #ChistmasDay. Enough travel, I’m relaxing #MerryCbristmas to you All!!!

(I know…I know….everybody wants Cynthia to drop Peter and get with Leon. Let’s pretend that will never happen)

This left a shady Peter alone with his own devices. One of those being a car and an overactive libido. Around 10 PM on Christmas, apparently Peter flipped his car and instead of just calling 911 like normal people, he went on social media and sent out 3 estrogen filled tweets: The first tweet was simply “Help”

The 2nd tweet was even more bitchy. He appeared to be complaining to the universe and bitching at everyone complaining there is no Christmas spirit.

Where is the Christmas spirit? We are in a car accident, car flipped, we are trapped in the medium!

The third tweet assured everyone that help had arrived.

What is apparent in the tweets is that he said “we”. Who is the other part of that we? The tweets are still up, but the photos he posted on Instagram are now deleted. I wouldn’t be surprised if the entire thing was just so Peter can get some more publicity. Ever since he started getting a little notoriety and some freedom with his place in Charlotte he has been on a mission to establish himself almost as his own brand. Personally I believe that both he and Cynthia decided to become relevant and the entire storyline of him “cheating” and Cynthia’s fake feuds are all so that they remain interesting enough to be signed to another season. So far it appears to be working.

Peter’s net worth is estimated at a mere $100,000 and Cynthia’s is only $500,000. Together they both are not worth even close to a million dollars despite the lifestyle they portray on TV. That makes the $300,000 per season that Cynthia is earning a critical component to their standard of living and the theory that all this “reality” is not so real even more likely.

Why else would someone post to social media for help during a car accident…and then delete the posts.