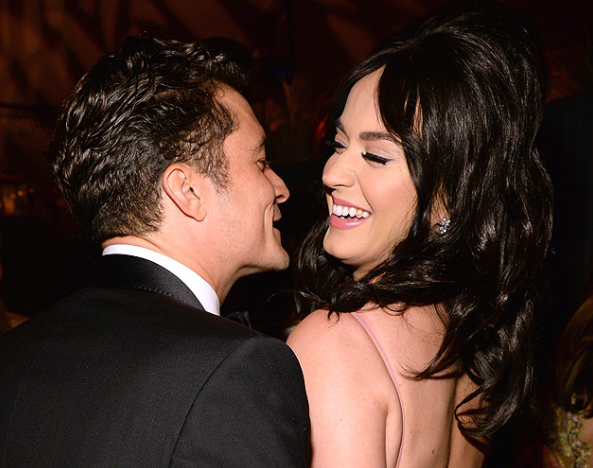 Let The Rumors Begin: Katy Perry And Orlando Bloom Were Caught Flirting With Each Other During Golden Globes After Party (PHOTOS) Do we have a new romance to report? Maybe. If you watched the Golden Globe Awards last night, then you know Katy Perry and her huge breasts were there to give out the award for Best Original Song.

After the terribly long award show ended, Perry made an appearance at the Fiji Water-sponsored party held at the Beverly Hilton. And while at the party, the 31-year-old singer made a special connection with 38-year-old actor Orlando Bloom.

Insiders at the party claim the two had incredible chemistry and were talking to each other all night. And as you can tell by some of these photos, the sources appear to be telling the truth. It certainly looks like Perry and Bloom were having a wonderful time together. They were “extremely flirty and whispering to each other” during the party. Sources say they even danced together when Justin Timberlake‘s Rock Your Body started playing.

Katy was showing Orlando her phone. They were both smiling and laughing and then he took her phone and started typing on it.

Shortly after arriving at the first party, Perry and her team decided to visit another after-party, and you can bet Bloom followed right behind her. Sources say she even put her arm around Bloom while talking to a group of friends.

I’m not saying Bloom and Perry are about to have a wedding, but let’s just hope Jaden Smith hasn’t donated his white Batman suit to charity.