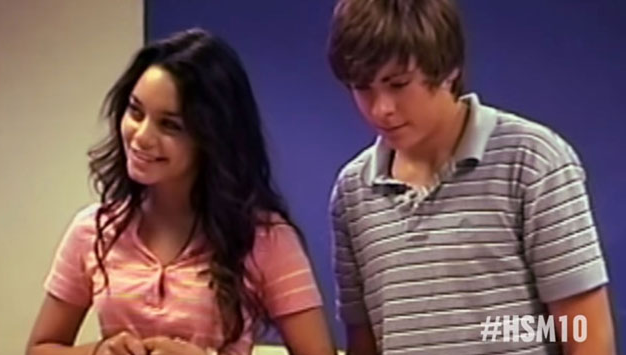 Earlier this week we warned you that the Disney Channel would be airing a High School Musical reunion on Wednesday for the 10th anniversary special. Hopefully you read the post and were able to watch the reunion last night, but we totally understand if you missed it.

We got you covered. The most adorable moment of the night came when the cast forced Vanessa Hudgens to watch the audition tape she made with Zac Efron. She was clearly embarrassed and shocked to see the video again, which made the moment even more entertaining.

One of the reasons the movie worked so well 10 years ago is because she and Efron had such great chemistry together. I believe I was entering my first year of high school when it was first released, and I remember thinking, “I hope I fall in love with my own Gabriella!” Obviously that never happened because I looked nothing like Zac Efron, and I couldn’t sing or play basketball.

But still, it was a nice love story, and it was clear Disney made the right decisions while casting the film. Watch the clip below to see the adorableness.